SoFi Ads: When You’re too Cheeky to be Nice 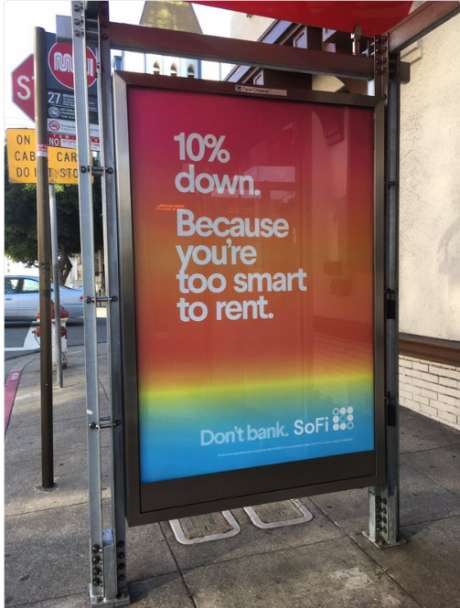 Controversial SoFi ads are back and this time they’re targeting renters.

SoFi’s new ‘tone deaf’ ad for its mortgage loan reads, “10 percent down. Because you’re too smart to rent,” implying those who rent aren’t.

The ad, running in San Fracisco and Portland has attracted some ire among people. SoFi’s penchant for cheeky ads is known by now. Its SuperBowl ad — “great loans for great people” boldly labels some people as “not great,” implying that they are ineligible to join a rather exclusive club of people who can get great loans.

Image at right by Jacob Ma-Weaver

Tone deaf? Yes. Hard to believe, but even some smart people don't have $110k sitting around @SoFi https://t.co/O8isvxCUjS

Tone deaf ad for SoFi. Especially ill advised when 63% of those in SF rent. https://t.co/cyH63Oe8mv

@SoFi Do you actually think that poor people are stupid or are you just stupid? https://t.co/On9dYo4ByY

Home › Marketplace Lending › SoFi Ads: When You’re too Cheeky to be Nice