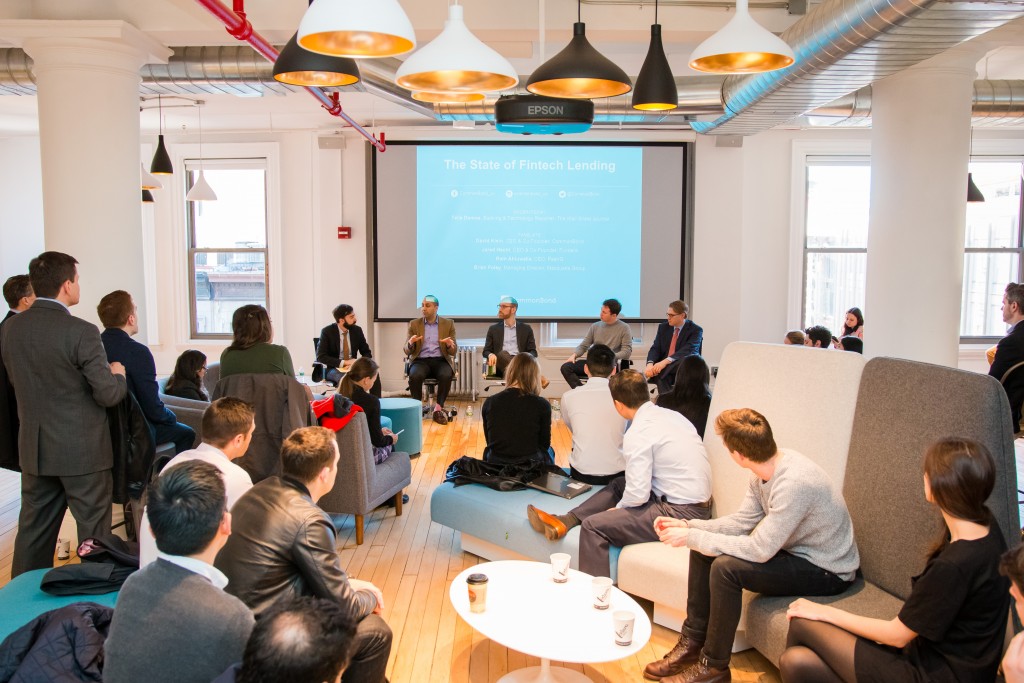 It’s kind of a problematic term, said CommonBond CEO David Klein about “marketplace lending.” Klein was one of four industry experts on the State of Fintech Lending panel hosted at their office on Tuesday morning. “Not all marketplace lenders are created equal,” he said. There are different asset classes, different credit spectrums and even different investor responses, he explained.

CommonBond for example, focuses on student lending and more specifically, the very upper end of the credit spectrum. As proof, Klein said the company has not even experienced a 30-day delinquency or default. Compare that asset with some of the products offered by Fundera, which range from merchant cash advances to SBA loans and it’s easy to see why marketplace lending as a category can be overly broad. Fundera CEO Jared Hecht was another panelist alongside PeerIQ CEO Ram Ahluwalia and Macquarie Group Managing Director Brian Foley. WSJ reporter Telis Demos served as the moderator.

Klein’s company deals with institutional investors, which loosely qualifies it as a marketplace in the sense that there are buyers for their loans. Hecht’s company is a marketplace too but for small business owners seeking loans. Fundera is not a lender. “We don’t have to run around and deal with the capital markets,” Hecht said.

Despite the incredible diversity of asset and credit classes, PeerIQ’s Ahluwalia described the quality of the securitizations taking place throughout the industry as very good. “This is going to be a very different movie than The Big Short,” he said. As of the end of 2015, PeerIQ ranked total cumulative securitizations at $8.4 Billion, with 41 deals issued to date (25 Consumer, 9 Student, and 7 Small Business).

Pension funds and insurance funds who are attracted to this space are focused on AAA rated bonds, said Macquarie’s Foley. “They want scale, performance and track record,” he said, adding that they’re happy to trade away return for a reduction of risk so that they can sleep at night.

Perhaps as part of that, however, the marketplace lending term will have to mature with it. “Each category is very different,” said Klein.