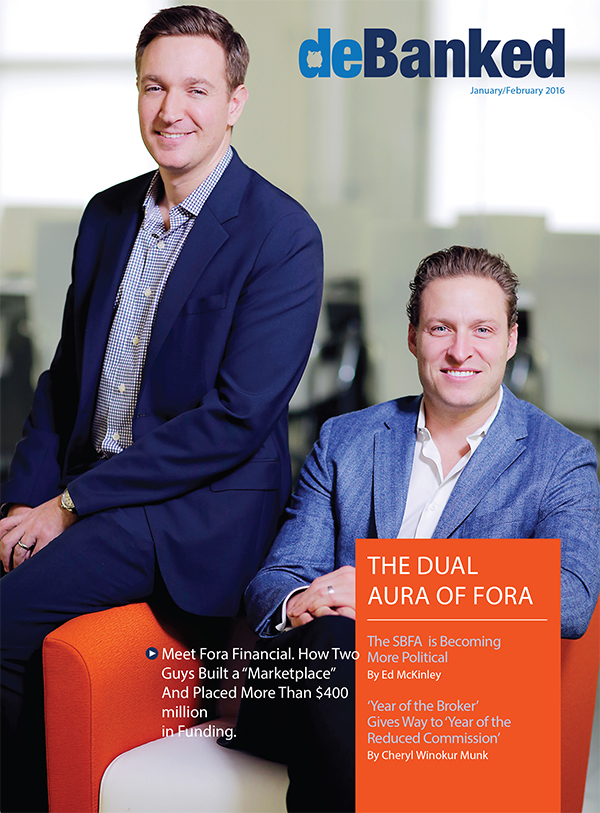 Entrepreneurs Jared Feldman and Dan Smith launched their company Fora Financial in 2008. Today it has placed more than $400 million in funding through 14,000 deals. Late last year, they sold part of their company to Palladium Equity Partners LLC for an undisclosed sum, but it is rumored to be quite sizable. It’s almost by coincidence that they named their company “Fora,” which means marketplace in latin, years before “marketplace lending” would become an industry buzzword.

Palladium, which describes itself as a middlemarket investment firm, decided to make the deal partly because it was impressed by Smith and Feldman, according to Green. “Jared and Dan have a passion for supporting small businesses and built the company from the ground up with that mission,” he said. “We place great importance on the company’s management team.”

The Palladium deal marked a milestone in the development of Fora Financial, a company with roots that date back to when Smith and Feldman met while studying business management at Indiana University. After graduation, Feldman landed a job in alternative funding in New York at Merchant Cash & Capital (today named BizFi), and he recruited Smith to join him there. “That was basically our first job out of college,” Feldman said.

It struck Smith as a great place to start. “It was the easiest way for me to get to New York out of college,” he said. “I saw a lot of opportunity there.”

The pair stayed with the company a year and a half before striking out on their own to start a funding company in April 2008. “We were young and ambitious,” Feldman said. “We thought it was the right time in our lives to take that chance.”

to make sure you get it!