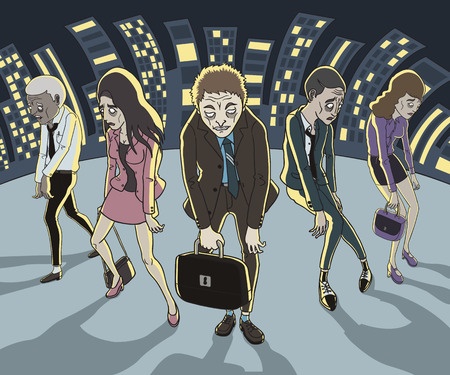 THE NEW THOUGHT MOVEMENT HAS TAKEN OVER THE SALES PROFESSION

Somewhere between the 19th and the current 21st century, the profession of sales as a whole integrated the concepts of the New Thought Movement, going so far as to actually shape the mantras, slogans and thought processes of salespeople everywhere.

In my opinion, the New Thought Movement has the potential to do far more harm than good, because it does not emphasize the importance of individuals learning how to critically think. It has an over-reliance on positive thinking and positive faith, with a complete disregard for critical thought and analysis. When a person fails to critically think, they can easily fall prey to scams, manipulation, brain-washing, etc. and even mismanage their finances through various forms of impulse (emotional-based) spending. As a result, for whatever amount of good that the movement does, in my opinion, it has the potential to do far more damage, such as the damage that I believe it has done to the sales profession.

THE HISTORY OF THE NEW THOUGHT MOVEMENT

It started in the 19th century with the promotion of ideals by philosophers such as Napoleon Hill, that life begins in the mind and that the quality of your life would be based on your level of positive thinking and positive faith. The mantra of the movement is that if you maintain the right level of positive thought processes as well as keep high levels of positive faith, then you can “attract” to you whatever you desire, which usually centers around materialistic items like fancy cars, shallow things like very attractive mates, significant wealth, or good health and wellness.

By the 20th century, the movement would eventually spread to various religious denominations in the form of the prosperity gospel (the word of faith movement), promoted through television evangelists and the vast majority of mega churches throughout the country.

By the 21st century, the movement would spread to even more authors and even film producers with the 2006 film “The Secret” which also included a book version of the ideals promoted during the film.

It was also by the 21st century that the movement had been fully ingrained into the vast majority of sales training material, which would serve as the foundation for a lot of what I deem to be “issues” of the sales profession today. These being the utter lack of critical thinking and critical analysis which leaves too many sales people as mindless, robotic, and routine order-takers, rather than strategic thinkers, innovators, and business developers.

Since this year’s March/April edition of deBanked Magazine, we have talked about the Year of The Broker as it relates to the surge of new brokers coming into the space. These new entrants are inspired by funders, lenders and large brokerages using techniques from the New Thought Movement.

They would sum up their rah-rah sales motivational speech with simply, “As you think, so shall you become,” quoting the great Bruce Lee.

Thoughts that arise of a critical nature that look for more market research, market planning, trends, innovative solutions, ROI analysis, and other forms of foresight are either quickly shunned as “over-thinking” or “negative thinking”. You might flat out be kicked out of the room where the rah-rah sales motivational speech is being conducted, with accusations of having “stinking thinking.”

The New Thought Movement’s over-reliance on positive thinking and positive faith can be detrimental to personal growth. Being a part of the Mom and Pop Network isn’t necessarily a bad thing, as I have operated within the Mom and Pop Network, but what’s shortsighted is not giving brokers all the tools they need to think critically and truly be successful.

For you to survive, you are going to need to have resources that the vast majority of other brokers don’t have access to. Relying on UCC records and Aged Leads (that every other broker is calling on), isn’t going to cut it. You are going to need resources that provide you with a significant market competitive advantage which includes but isn’t limited to: having better data so you can produce your own exclusive internal leads, having “center of influence” partnerships with banks, credit unions, and other professionals, having access to creative financing in the form of either equity or debt, among other advantages. These advantages will not just give you a leg up over other brokers in the market, but they are truly the key to your long term survival.

In my opinion, The New Thought Movement does more harm than good, by not emphasizing the importance for individuals to learn how to critically think.

We are living in the day and age where to survive in any professional sales environment, you are going to have to be more of a critical thinker and do things outside of “the box”, versus being the stereotypical smiley faced, overly optimistic, robotic, sales guy, that’s incapable of true “independent thought.” You want to be the sales guy that thinks and operates outside of the box, which is basically this bubble in which everybody else is operating and thinking within. You can’t achieve this unless you first embrace cynicism by taking a long hard look at this box, poke holes in it, discover new ways to profit, and then blaze your own trail.

Being cynical, pessimistic and “negative” are the first steps towards becoming an excellent critical thinker, even though they will not make you feel as “good” as compared to that of being optimistic and positive. But in that regard, I must quote Dave Ramsey in that: Children do what feels good. Adults make a plan and follow it.

Critical thinking doesn’t feel good, but you can’t properly plan without it.