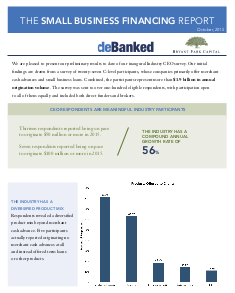 If you haven’t seen the industry’s first Small Business Financing Report prepared by Bryant Park Capital and deBanked, you can DOWNLOAD IT HERE. These are the only statistics from the survey that are being shared publicly. A more comprehensive report will be privately available about three weeks from now.

Seven of the respondents in the study were on pace to originate more than $100 million in 2015 and overall the industry was found to have a three-year Compound Annual Growth Rate (CAGR) in originations of 56%. For comparison’s sake, OnDeck had an originations CAGR of 159% from 2012 to 2014 according to their quarterly reports.

The numbers show an explosive industry and evidence as to why OnDeck may have been the first to go public. CAN Capital, by contrast has a five-year originations CAGR of 29% according to Orchard Platform. While perhaps lower than the industry average, it’s an astounding figure considering they’re a 17-year old lender.

According to Morgan Stanley analysts, a broad evaluation of “marketplace lending” originations will continue to grow at a CAGR of 47% through 20%.

There is apparently a lot more room for growth.