CPA Yoel Wagschal recently started working with a syndicator who relied on Excel spreadsheets to track all his deals. The syndicator thought he had everything in tip-top shape, but it turns out that his system was hard for an outsider to understand and the data didn’t reconcile with his bank statements.

Wagschal, who heads an accounting firm in Monroe, New York, comes across this problem frequently these days. It’s been exacerbated by the exponential growth of the alternative funding industry in recent years. There are a sizeable number of alternative funders that started out small and have grown by leaps and bounds, yet they are still using rudimentary systems to keep track of their business dealings. In most cases, funders want to do the right thing, but they don’t always know how or the extent of what’s involved. Unknowingly these funders may be setting themselves up for financial or legal troubles. 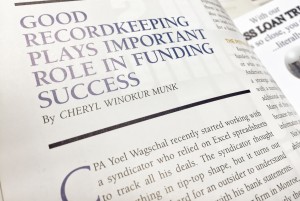 “Sooner rather than later you are going to find yourself swimming in the Atlantic Ocean without any plan on how to get out of there,” Wagschal says.

Although newbie funders may be able to get by with simple tools and minimal staff, more sophisticated efforts are required once they are doing multiple transactions a month. It’s one thing when you are tracking a few daily deals on a spreadsheet. It’s quite another when you’re trying to keep track of all the moving parts for hundreds of deals.

What’s more, there’s a lot of slicing and dicing of data that goes into properly understanding your existing business and growth possibilities. If you don’t use the right tools to help you keep precise records, it’s nearly impossible to understand the fundamentals of your business in order to grow. Excel, while a useful tool, has its limits, and funders who rely exclusively on spreadsheets don’t get the benefits of other more sophisticated options that have become available to them in the past few years. Manually entering data also increases the possibility of human error, which can lead to thousands upon thousands of lost revenue for a funder’s business.

The Pitfalls of Not Keeping Good Data

Keeping good data is especially important to funders who want to take on additional investors or who are considering a sale at some point. Kim Anderson, chief executive of Longitude Partners Inc., a strategic advisory firm in Tampa, Florida, works with a number of funders that are looking to facilitate additional growth by bringing on outside investors. Many of these companies find themselves scrambling because they don’t readily have access to the kind of information potential investors want.

Not keeping good books can also inhibit a funder’s ability to expand into additional markets. Say a funder wants to introduce a new product or migrate a product offering to a different vertical. Companies that don’t analyze their data effectively may have a hard time understanding what part of their existing portfolio would be the most appropriate or profitable segment to introduce the product to, Anderson says.

“THERE ARE THOUSANDS OF PAGES OF RULES ON HOW BANKS HAVE TO CLASSIFY PERFORMING AND NON-PERFORMING LOANS. NONE OF THAT EXISTS FOR THIS INDUSTRY, WHICH IS COMPLETELY UNREGULATED…”

Potentially impeding growth is bad enough, but funders that don’t keep proper books can also find themselves embroiled in legal or tax troubles. Some MCA providers, for instance, have faced stiff penalties for treating transactions as loans on their books instead of the purchase and sale of future income.

“If they are showing the revenue recognition in the exact same way that loan industry companies are doing, then they are setting themselves up to be judged in the same way that a loan company would,” says Christina Joy Tharp, a staff accountant in Wagschal’s office. If you’re using the same accounting methods as lenders, you could be deemed a predatory lender by multiple enforcement agencies, even if that’s not your intent, she says.

As a result, funders don’t have a universal way of keeping their books. Many funders believe that as long as they are collecting sporadic payments, a loan or receivable should be classified as performing. Gemici strongly disagrees, saying this approach sets up a funder for potential failure given that the default rate for loans/receivables is about one in five. “It’s one thing to show on your books that loans or receivables are performing, it’s another when you run out of cash,” Gemici says.

Choosing an Outside Provider

Recognizing that Excel spreadsheets can only carry a funder so far and that out-of-the-box software probably won’t be a complete solution for alternative funders, a small number of companies have stepped up to provide customized solutions for the industry. MCA funders—where the perceived need is greatest—are a particular focus for these providers. 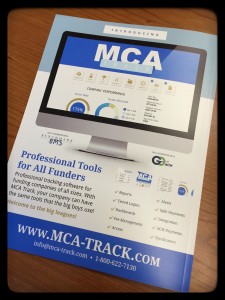 Benchmark Merchant Solutions, a processor in Amherst, New York, is one such company honing in on the MCA funder space. In 2014 the company launched MCA Track, software that’s designed to help MCA funders with their recordkeeping needs. It also helps them keep track of their income for tax purposes.

Among other things, MCA Track allows funders to view their performance at a glance. It shows them, for example, how merchants are performing, how the funds are allocated according to syndicator, the status of a deal, open cash advances, closed cash advances and defaulted cash advances. Funders can also get profitability data and other types of big picture information about their business as well. The software costs about $2,000 a month depending on the user’s size.

Benny Silberstein, chief operating officer of Benchmark, says the software was created because the processing company found that funders were often asking Benchmark to get data for them, especially when there were discrepancies. It can be real headache for funders to wade through inconsistencies with merchants, syndicators and ISOs, Silberstein says. “I can’t begin to tell you how many times funders asked us for a list of all the payments they’d received.”

PSC of Port Washington, New York, is another company trying to help MCA funders keep better records and manage their business more effectively. For a monthly membership fee, the company offers a front-end to back-end relationship management solution that allows funders to track all their contacts, documents, deals and commissions. Daily reports provide detailed data and summary information about an MCA’s funding business. The data includes the actual advance amount, the right to receive amount, the factor rate, processing fees, daily debits and credits, commissions paid to outside brokers or their own people, other management fees, ACH fees, wiring fees, payments, missing payments, collections information and participation with other syndicates.

The product has been on the market for about two years and the monthly fee varies according to a funder’s size, says Tom Nix, director of sales for PSC. He declined to be more specific about cost.

“The companies that are small and just starting out—if they are just doing a few transactions a month—they could probably get by using a spreadsheet. But that’s only feasible if you have a few transactions that you’re doing per month. Once you’re growing, when you get up to 10, 20, 30, 100 deals, the management of data becomes truly uncontrollable,” says Nix, who has seen a number of funders struggling to stay afloat or exit the business entirely because of their inability to keep good records.

“If you don’t have the right information and understand it, you’re going to give money to someone and you won’t [necessarily] get it back,” Nix says.

It’s possible for funders to set up their own infrastructure, but it can be costly and some feel it detracts from their ability to generate new business. That’s why Anthony Mannino, president of Nulook Capital in Massapequa, New York, chose to work with PSC. He researched the idea of doing all the back office and data collection on his own, but he decided not to reinvent the wheel since it would have meant hiring additional staff and would divert the company’s attention away from its primary focus—bringing in new business.

“A service provider like PSC gives us the ability to grow our company controlled and in a much quicker manner than we ever could than if we had to build our back end on our own,” Mannino says. “It takes most of the responsibility off of my company so we are able to focus on just growing the business and growing the sales.”

“IF YOU DON’T HAVE THE RIGHT INFORMATION AND UNDERSTAND IT, YOU’RE GOING TO GIVE MONEY TO SOMEONE AND YOU WON’T [NECESSARILY] GET IT BACK…”

CloudMyBiz Inc. in Los Angeles is another company trying to service the alternative funder market, providing customized CRM systems for both lenders and MCA providers.

The CloudMyBiz system relies on a platform called Salesforce and is customized to the funding industry. It helps funders with the various facets of origination, underwriting and loan servicing. It helps them generate and track leads, automate funding workflow, understand and manage their deal pipeline and daily funding activities, collect and schedule recurring ACH payments and track syndication partners.

You could buy the Salesforce software and use it out of the box, but it provides only the basic functionality that funders need to run their business properly, says Henry Abenaim, principal consultant at CloudMyBiz. That’s where CloudMyBiz comes in by customizing the software for a funder’s specific business requirements. The fee varies widely, depending on the funder’s specifications, he says, declining to be more specific.

About two and a half years ago, Creative Vision Studio LLC in Long Beach, Calif., which had focused on the merchant credit card processing industry for more than a decade, also started offering a CRM system to MCA providers. The software is called Bankcard Pros CRM and customers can use it for merchant credit card processing, MCA or both. The software automates the data entry, underwriting, approval, funding and payback process from start to finish, says Robert Hendrix, the company’s chief executive. Funders also have access to 17 different management reports so they can track the performance and profitability of their entire portfolio per month.

The company charges an upfront fee of $4,000 to $5,000 to use the software, which is customized to a particular client’s business. There’s a $399 monthly fee after that. While it may seem costly to some funders, Hendrix says the software pays for itself within a month because of the efficiencies created. Importantly, the software eliminates the possibility of costly human mistakes that can occur in manually updating daily payments on a spreadsheet. “One little mistake can cost funders $2,000 to $3,000, even up to $10,000. They can be very costly mistakes,” he says.

It is, of course, possible for funders to keep good books and records using homegrown systems and personnel, and funders need to carefully weigh their options, taking into account that doing it right will probably require a meaningful investment in infrastructure and personnel. Whether they do it alone or hire an outside vendor, the important thing for funders is to collect the data and be able to evaluate it and display it in a way that makes sense to them, their customers, tax preparers, potential investors and others who need access.

Funders also need to remember that being successful in the business over the long term requires them to do more than simply capture accurate data. Beyond that, funders need to be able to manipulate the information in a way that helps them understand the nuts and bolts of their specific business, says Anderson of Longitude Partners.

“They may be able to produce enough financial information to complete an accurate tax return, but when it comes to understanding their operating metrics, they may not have collected or evaluated all of the right information to answer questions about what really drives the growth or sustainable profitability of the business,” he says.