With OnDeck IPO, Strangers Walk Among Us


The future isn’t ours to make anymore. Not ours alone anyway. Last week the industry was a group of insiders. Today the outsiders walk among us.

$ONDK looking good, but surely this will fall by tomorrow.

I don’t know who IpoBandWagonTagAlong is but he’s now an influencer in the industry. Almost 13 million shares of OnDeck Capital traded today, its very first day on the NYSE. 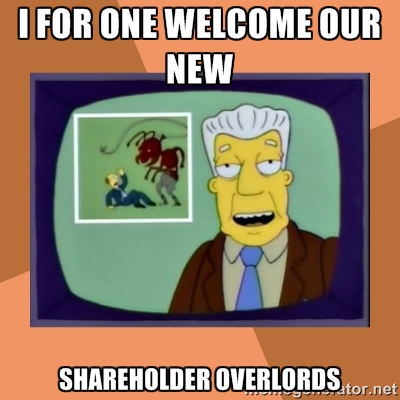 It hurts to see “seems similar business to [Lending Club]” as the information being gleaned about OnDeck. I could spend an entire week contrasting the differences but it doesn’t matter anymore. Opinions about OnDeck and the industry they’re part of are about to be formed in tweet-sized pieces at rapid fire pace. Anything longer and the opportunity presenting itself on a trade might pass. Wild.

If you’re in the merchant cash advance business, you’re about to learn that describing the purchase of future sales in anything more than 140 characters is going to work against you. You will inevitably be asked if you do what OnDeck does and you better be concise.

Exactly 140:
“We provide working capital to small businesses by leveraging their future sales. It’s not a loan but it is in some ways similar to OnDeck :)”

Or you could simplify it further and just write:
“Seems similar”

The most striking thing I experienced on opening day was watching so many OnDeck bears transform into OnDeck bulls. Lots of buy orders were placed by those that have been chugging hater-ade for years.

I think that despite reservations with their business model, there was a desire to touch the company in some way, to feel like they were a part of the industry’s milestone. I totally get it. But that brings up an interesting question, how much of the stock can you touch until you start to hold some sway?

I mean shareholders are owners right?

Theoretically, could a terminated ISO buy up shares and then start making demands about re-establishing a partnership? What is the protocol here? Can OnDeck’s ISOs buy OnDeck? Or OnDeck’s competitors? I don’t mean a controlling stake but enough to make some noise. Imagine OnDeck being a funder for the ISOs by the ISOs! If a huge ISO is terminated, does that have to be announced to the public at the same time that the ISO community finds out?

This is a very gossipy industry and coincidentally, I run practically all the industry gossip websites so people like me want to know.

What if a merchant owns shares of the company it is applying to? Is that a positive underwriting data point?

With an office close to the New York Stock Exchange, I was able to at least snap off a few pics of the big banner displayed outside.

And if you’re wondering if I bought stock in OnDeck, I did not. I didn’t buy Lending Club either. It has nothing to do with how I feel about either company.

According to Crain’s, OnDeck’s “$1.32 billion market cap at its debut was the biggest for a venture capital-backed New York City tech company since 1999.” The stock exploded upward almost 40% from its open today. A lot of folks in the industry bought in and the rest is history.

Home › Loans › With OnDeck IPO, Strangers Walk Among Us