Small Business Lending is about to drop even further. It has to. Today’s 512 point kick to the groin was less about fear of the future and more about the issues we’ve been unwilling to acknowledge in the past. Let’s not water down the facts:

The economy is not growing.

There is no recovery.

There is no improvement.

That is it. There’s been far too many “growth is slow but…” rationalizations in which dismal results are chalked off as seasonal, aberrational blips, just because they don’t fit in line with our delusions of recovery. We all saw today coming, let’s not kid ourselves.  See our evidence:

Figures that fall below 400,000 are considered to be conducive to hiring and growth.

News outlets have published more recent figures, with the data indicating claims above 400,000 for each of the last three weeks of July. Seventeen straight horrible weeks show no signs of improvement in the job market.

Greece Has 100% Chance of Default

Rate of GDP growth is declining. The first quarter was dangerously close to a recession. 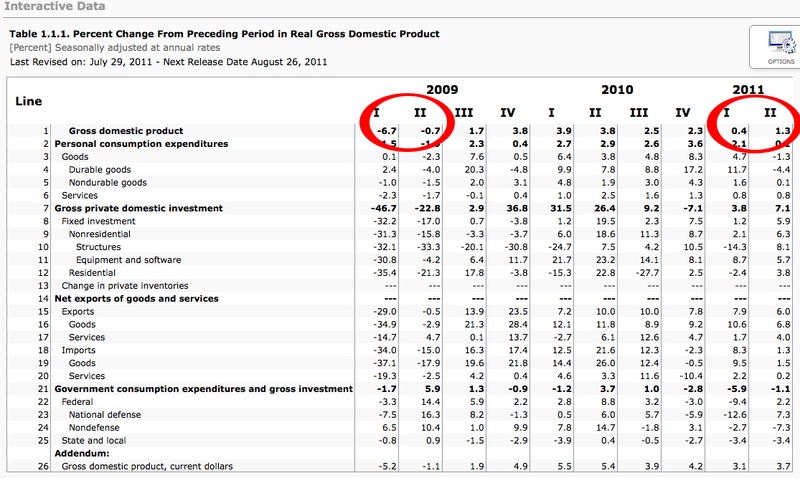 “Nearly 15% of the U.S. population relied on food stamps in May, according to the United States Department of Agriculture.”

Where is the good news? There isn’t any. For the first time in a long time, the media isn’t able to keep up the recovery lie any longer. And the Federal Reservce is powerless to help. Interest rates have been kept near 0% for the past couple years and the $14,000,000,000,000+ deficit hinders their ability to issue more stimulus. Yikes!

Small business lending has been on the decline for awhile but the lack of fear in the market has kept the dirt tucked under the rug. Bankers were under the impression that there was a recovery in motion and now that they’ve become aware otherwise, it’s about to get really ugly.

To illustrate what’s already happening, a friend of ours manages the retail underwriting department for a large national bank. He spoke to us under the condition of anonymity and had this to say about their recent shift in policies:

“We are still lending but we’re using a ‘1:1 cash collateral rule’. What that means is, if a business wants to borrow $100,000 they must already have at least $100,000 in cash or cash equivalents on their books. The cash itself isn’t the collateral, it’s just a prerequisite to ensure they are especially equipped for a future cash-flow crisis. $100,000 of real collateral is still required but at this point we don’t ever want to be put in the situation where we’re chasing down a borrower to sell off their assets. Our loans don’t yield nearly enough to survive even just one default. People always joke that banks won’t lend unless the borrower doesn’t need the money. Now we won’t lend unless you already have the money!“

And so we’re entering a dark age, a slow approach back into a recession that we never actually came out of. There’s no reason to think that this will cause banks to increase lending and it is highly doubtful that it will remain at its current levels.

So what’s the prognosis? The Merchant Cash Advance industry may soon have it’s so-called ‘Moment‘, but not because the small business community demands it, but because there won’t be anything else left…