Need evidence that the Merchant Cash Advance industry has gone mainstream? One of our site’s editors shared this story:

I’ve been working in the Merchant Cash Advance business since 2004. It’s been quite a journey and we’ve really made a difference to small businesses facing capital shortfalls. The growth has been phenomenal and there have been dramatic shifts both in underwriting standards and the characteristics of our clientele.

While I could sit here and write a book about my experience, it’s the phone call I received last week from an old buddy of mine, Bob, that’s worth sharing. Bob is a Venture Capitalist(VC) out in California. He’s a self proclaimed expert of the hospitality industry and has heard a thousand young entrepreneurs pitch him a thousand different ways.

He’s always kept a distance from the Merchant Cash Advance industry and yet is always eager to hear about our tales of success, the achievements of our clients, and our ability to evolve to meet their needs. Last week Bob learned something and gave me a call.

He was sitting in a boardroom in Denver, Colorado. A group of entrepreneurs that made it big with a hotel in Florida, wanted to double their luck and open another hotel there and several in Wisconsin. These were well capitalized individuals and were pitching them for a cool $2 Million.

Bob’s firm seeks equity, so when the hotel group flatly stated that they did not intend to give up any shares, some were ready to declare the meeting over.

The powerpoint presentation flashed to the next slide and the entrepreneurs’ financial proposal was outlined in detail: “In return for $2 Million, you will be purchasing $2,400,000 of our future credit card sales. We will allow you to withhold 15% of each card transaction up until the purchased amount is paid in full.” The withholding percentage would also apply to the location that’s already established.

None of the deciding members of the VC firm like loans too much. There’s something about one payment per month that seems to not work anymore. Too many young businesses see monthly payments as an opportunity to leverage heavily. Having to make one monthly payment to the VCs enables the business to spend money on 20 other projects, all of which carry their own singular monthly payments. Then at month end, the cash gets spread too thin, and suddenly not all of these monthly payments can be met. Sure there are restrictions and terms that are supposed to prevent the business from doing this while the loan is outstanding, but there’s not much anyone can do about it if these terms get violated anyway. By the time the lenders find out, the return on investment is nullified by the cost of fixing it and that’s just if the problem can still be remedied at all. Sometimes all the money is just gone and the lenders have no idea until the day the monthly payment is due.

A purchase of the hotel’s future credit card sales would not classify this proposal as a loan, nor would it rely on a hope that the hotel’s books were properly managed and a payment made on time. While the VCs considered the unique level of security in getting repaid, Bob had a Eureka moment and took a timeout from the meeting to call me.

“It’s the pay as you go aspect of it that I like. The pace at which we get paid purely depends on the sales volume of the business. Sales up, we get paid more. Sales Down, we get paid less. Good for them, Good for us. If our credit card processing partner is withholding 15 percent of the sales before they’re deposited into our client’s bank, the hotel guys won’t face liquidity issues to meet our payments because we’re already getting paid. They can spend what’s deposited and we don’t have to get nervous on the 29th of the month.” and on and on Bob went, to which I replied, “Yes buddy, some of us have figured this out years ago.”

While $400,000 was a little bit below their desired return on investment, the VC firm put the entrepreneurial hopefuls up in a hotel for a weekend while they convened. There was an intense debate on the subject of equity vs. the purchase of future sales. One triumphal argument was that since hotels conduct transactions on a daily business, they would be collecting back on their investment every business day. That would allow the VC firm to reinvest those funds immediately.

Without completely spilling the beans on a negotiation that included non-disclosure agreements, a compromise was reached. The entrepreneurs left with a deal where they retained 100% of their equity and a structure where payments are made only at the pace that they are able to generate sales. It may have cost them more than what bank loans were going for in 2005, but like Bob and the other VCs made bluntly clear to them “What’s a bank loan? I don’t know any banks that are actually in the business of lending anymore.”

Bob could tell you that he’s been in the Venture Capital business since 1994 and it has been quite a journey. VCs have really made a difference to entrepreneurs with capital shortfalls. The growth was phenomenal until things started to change. The sale of future credit card sales from business to investor is a true mutually benefitting transaction.This structure is not only gaining popularity, but also solidifying a permanent footing in the financial transaction world altogether.

Don’t be surprised if John Doe business owner shows up at a local Bank of America branch in 2014 asking for a loan and this happens: “A loan, What’s that?” replies the financial officer. “Based on your merchant processing history, we’d like to purchase $30,000 of your future credit card sales.”…. 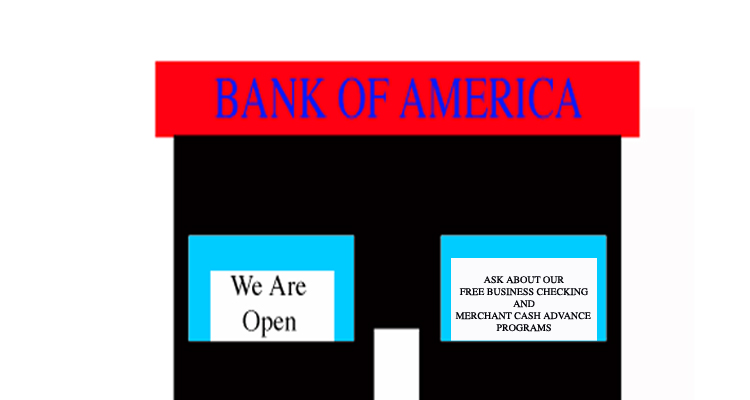