Underwriters have shared with us that it is more challenging than ever to determine if a merchant has an existing MCA balance already. Integrity Payment Systems, a merchant processor in Chicago, recently stated that they have signed on nearly 100 split funding partners. This is astounding given that we only list 24 officially recognized funding firms in our database. Sounds like we could use an update.

The challenge is not so much that WE don’t know who is funding merchants, but rather MCA firms don’t know. We’ll be the first ones to tell you that a retrieval percentage used to be black and white on a merchant statement. If not, you couldn’t miss that big fat UCC-1 lien by a known MCA firm. Those were the easy days when you saw “Secured Party: Fast Capital” and you could phone them up to verify a balance or find out what the scoop was.

Nowadays, there are lockbox programs, ACH debit programs (both variable and fixed payments), and a whole slew of creative structures to make MCA financing possible. The North American Merchant Advance Association(NAMAA) has an exclusive live network of funding activity. That means any NAMAA member can login to make sure that another member doesn’t already have an outstanding balance with the merchant they are about to fund. This database is an invaluable tool to the industry’s success and yet it has one major flaw, there are ONLY 12 members!

So let’s run through a scenario:

Mr. MCA Underwriter is analyzing an application and supporting documents. There is nothing being deducted from the 6 months worth of merchant statements. The bank statements look clean. The credit is good. Everything is pointing towards an approval until they do a UCC search. There are a few terminated UCC’s from over 5 years ago by Bank of America, back when bank lending actually existed. There is nothing since then, except for one by a so called ‘ABC LLC’. There is an address for ABC LLC but there is no contact information for them and a web search reveals nothing about their location or what it is. The UCC language is generic and indicates that it is a lien on the debtors property. Mr. MCA Underwriter has seen plenty like it before but asks the merchant about it anyway. The merchant indicates ABC LLC leased them all their equipment including a new oven and freezer. Everything adds up, the deal is approved, and subsequently funded.

Five days later Mr. MCA Underwiter gets a call from an upset individual with accusations that the merchant’s processing receivables already belong to someone else, an ABC LLC. The individual is a reseller of MCAs normally but has funded 5 clients with his own money(a trend becoming more popular. Read here). He funds those deals under a nondescript company, ABC LLC so that nobody will figure out what it is and solicit his client. Mr. MCA Underwriter explains there was no evidence of repayment of a MCA. It turns out the merchant defaulted 7 months prior and hence the 6 months worth of documentation were clean.

For the past few years, it has been very common for resellers to search UCC databases by secured party, thus revealing ALL of the clients that particular secured party or MCA provider has funded in that state. Those clients are then solicited with the appeal of better rates on a MCA and incentives to get bought out. For some MCA providers, this has had a disastrous effect on retention.

ABC LLC successfully protected themselves on that front because no one was able to identify them as a MCA provider. Thus there was little chance their clients would be revealed. However, the strategy backfired when it became unclear that the merchant’s future credit card receivables had been sold.

ABC LLC’s strategy is becoming extremely common. Many MCA providers are resorting to using code names as the secured party to throw UCC hunters off the trail. We list a lot of those code names HERE. Combine that with the fact that hundreds of people are now funding their own accounts and we have a big mess of no UCCs, confusing UCCs, and incorrectly filed UCCs(some funders are filing them in the state they operate in instead of the state the merchant operates in). 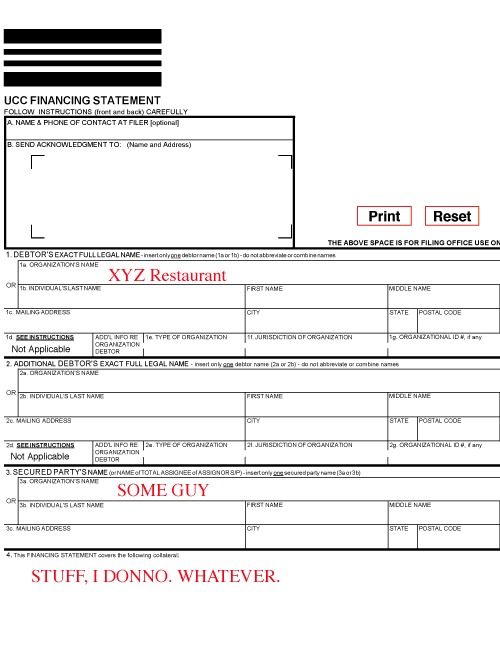 Mr. MCA Underwriter is facing a lack of clues and it would not be surprising if the industry starts to see a resurgence in advance stacking. If anyone would like to anonymously share UCC code names that we do not have included in our records, please e-mail them to merchantprocessingresource@gmail.com

As the industry evolves, so will the issues. In our opinion, MCA providers should be plainly clear on the arrangement they have with their clients. No judge is going to listen to a story about code names, misleading UCC language, or why you don’t file at all. A UCC-1 is intended to be a public notice and is meant to be found. Small businesses will benefit by the expansion of the MCA industry but poor use of UCCs will inhibit the rate of growth.