Attention business owners and to all those employed in the merchant processing and Merchant Cash Advance industry. The world is changing and not at the ‘global warming will one day kill us all’ pace. It’s happening right now. Remember that little thing called the Wall Street Reform and Consumer Protection Act that passed in July? There was a little itty bitty part in there that we so happened to broadcast and critique in detail on our site, known as the Durbin Ammendment. Take a look the law’s summary, particularly #3. On the evening of December 16th, the Federal Reserve Board delivered an early Christmas present to all the debit card networks and big banks. The gift contained the government’s proposed debit card fee changes, or as some bank executives might tell you, “they mailed us 10 sticks of dynamite.” If you’re serious about this business, read through the 176 page document that every news agency is trying to sum up in 3 paragraphs. 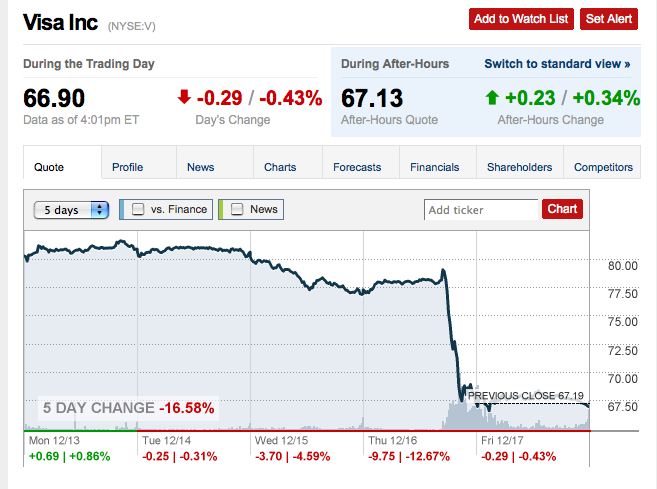 Visa’s stock plunged on the news

Debit cards accounted for 35% of all non-cash transactions in 2009. The proposed changes seek to cap the fee charged for accepting a debit card to a maximum of 12 cents. According to the report issued by the Board, here’s what businesses are paying now:

Debit interchange fees have always been assessed as a percentage of the sales amount. The larger the transaction size, the higher the fee. Debit cards are most frequently used for smaller purchases but a flat cap on transaction fees regardless of transaction size is a game changer. Now twist this with the fact that interchange fees are almost disappearing altogether and one needn’t think too hard about the unintended consequences.

MasterCard issued a statement immediately. “Experience demonstrates that consumers, not banks or payments networks are the biggest losers as a result of this regulation,” said Noah Hanft, MasterCard’s general counsel. “This type of price control is misguided and anti-competitive, and in the end is harmful to consumers.” Visa hasn’t provided any useful feedback at this time but has openly condemned the report.

The Board acknowledges that some card issuers can’t even cover their own costs with the 12 cent transaction fee in effect. This Board’s direct response to this dilemma is that they simply don’t care. “An issuer with costs above the cap would not receive interchange fees to cover those higher costs. As a result, a high-cost issuer would have an incentive to reduce its costs in order to avoid a penalty.”

Thank you Federal Reserve for the feeble minded, anti-capitalistic solution. “Just lower your costs or we’ll fine you.” The outrage is warranted because the proposal isn’t really a proposal at all. This is the new order granted to the government after the passage of the Wall Street Act back in July. The payment networks and banks may comment on this proposal but effective July 21, 2011, this simply becomes law.

This is the equivalent to forcing all the businesses in America to lower their retail prices under penalty of law as the solution to dealing with consumers whining about the recession.

Additionally, the Board constantly refers to the life cycle of a debit sale to being a 4 party transaction. There is:

The payment networks are what allow the acquiring banks to communciate with the banks that issued the debit cards. The networks have costs associated with their service, infrastructure, and overhead. The 12 cents per transaction is the combined total that can be charged between both the acquiring bank, payment network, and issuing bank. There’s not a whole lot to go around.

While the Federal Reserve and congress are patting themselves on the back and high fiving eachother for saving the economy (by sticking it to the big banks), the end result will be the loss of millions of jobs, the elimination of debit cards, an increase in other bank fees, the end of all debit rewards programs, the end of electronic payments quality, the end of electronic payments assurance, and the collapse of the free market economy. Give me a high five. Not!

Here’s what will happen and why:

* The Board ignores or does not understand the electronic payments industry business model. The debit card business is not a 4 party transaction. The acquiring bank party encompasses multiple layers and parties in itself. Acquiring bank —> Payment Processor —> Indepedent Sales Office —> Sales Agents. Debit transaction costs are marked up at each level to create a competitive marketplace. The electronic payments industry employs millions of people. With a 12 cent cap and no markup abiliity, those millions of workers will lose their jobs overnight.The majority of this business is commission based, with processors and sales agents directly taking home solely what’s generated on the markup of debit/credit fees of their clients.This is probaby the most blatent and incredibly obvious oversight. There can be no competitive market because costs are fixed and there can be no sales because there is no money for anyone to earn on markups. National unemployment will rise several percent over the course of a few months.
* Rewards debit cards can no longer exist. Card issuing banks currently pay their customers rewards by charging businesses more for accepting a rewards card transaction. Since a bank no longer has that ability, rewards cards can no longer exist.
* Debit cards become a moot point for banks. With no profit incentive to put them in the hands of customers and no ability to compete on price, there is no incentive for debit networks or cards to continue.
* Quality, fraud protection, and assurance will suffer. Banks whose own costs are higher than the imposed cap face fines by the Federal Reserve unless they cut costs. Therefore the government is not only incentivizing poor quality, but in fact making it mandatory.
* Ever hear of too big to fail? This industry is too big to be messing with. These are the actual national and international money networks through which trillions of dollars move through every day. Mandating poor quality, eliminating all competition, and removing profit incentives will de-evolutionize the flow of money altogether.

The Board will review and allow comments through March 31st, at which point this industry will meet its maker. Yes, it’s that’s serious.