Technology will be the end of us all

When bank lending dried up, Merchant Cash Advance (MCA) providers fulfilled the need to keep America’s small business owners going strong. By withholding a percentage of each credit/debit card sale automatically, there was no need to worry about a client’s ability to make payments. Without the risk of late payers or non-payers, MCA providers singlehandedly eradicated credit score from the underwriting guidelines. Or so they thought.

Only a small percentage of businesses in default actually close their doors. Circumventing the MCA provider’s merchant processor or incentivizing customers to pay with cash are issues that have plagued the industry for years. While this would constitute a clear breach in the sale of one’s future receivables, it’s not always a deliberate act of malice. However, there is a direct correlation between the frequency of breaches and *surprise* declining credit score.

But in the instances without malice, such as if damaged POS equipment prevents the flow of processing, there’s not much a MCA provider can do other than help fix it. These gaps in collection affect the bottom line and lead to upward pressure on costs or tighter restrictions on approval, two outcomes that nobody wants.

And as if there already wasn’t a strain, changes in payment technology are quickly eroding the MCA industry’s turf. The credit/debit card sales of a business aren’t exactly limited to one of these:

Now there are options, lots of them. In today’s world you can accept electronic payments with almost anything, a conundrum for MCA providers aiming to collect a percentage of all of it. And how about those routine PCI compliance upgrades? There are countless businesses with a basement full of old credit card machines that could be plugged back in, put back into service, and freely used to circumvent their financial obligations.

Take this clothing retailer for example. She qualified for an advance of only $5,000 but when it came time to convert the merchant account, the process wasn’t so easy: 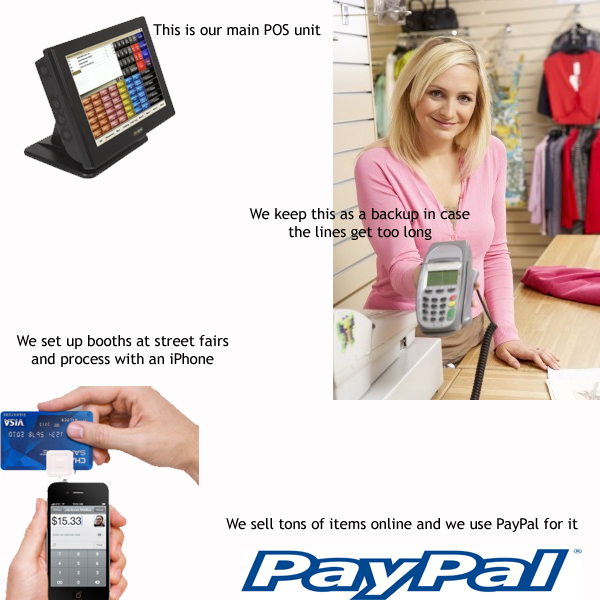 Nearly all of the transactions conducted inside the store happen through the touch screen POS. The merchant statements reflect consistent historical sales of nearly $4,800 per month, instilling the belief that the future won’t be much different. But when the customer lines get too long, there’s a backup credit card terminal that they pull out from under the counter that still has an active account with a previous processor. Around the holidays, they dig out the old Tranz model terminals from the basement and use them too. For street fairs and trade shows, they attach their Square to their iPhone and process on the go. And when it comes to their website and Ebay, PayPal is their preferred method of payment.

This doesn’t mean the touch screen POS won’t continue to see $4,800 worth of action per month, but the situation doesn’t inspire a lot of confidence if the goal is to collect a percentage of their credit/debit card sales. What if they occasionally use Square inside the store? What if phone orders are punched into PayPal? These things may happen inadvertently or simply because their customers demand it.

To firmly secure a purchase of future sales, the MCA provider would need to do the following: 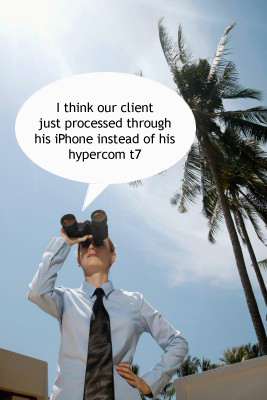 That’s a lot of effort for $5,000 but doing anything less is a gamble. That’s another reason why MCAs are more expensive than bank loans. Without set fixed payments, they are extremely vulnerable to economic ups and downs and now the explosion of payment alternatives.

Rather than stay ahead, the industry is becoming more fractured as evident by the rise of new funding sources such as Kabbage, that lends against future PayPal sales. It’s innovative but vulnerable. Kabbage depends on the success and status quo of PayPal for survival, a characteristic that is not likely to carry them far. Similarly, MCA providers are dependent on withholding a percentage of future sales, an uneasy task in a world where the point of sale itself is changing.

Innovation in the MCA space has gone as far as automated bank debits and a lockbox. One depends on the merchant’s use of a single bank account and the other is equally exposed to the issues we’ve discussed.

Which of course begs the question: If electronic payments are becoming more elusive to capture, how can the MCA industry survive? The obvious answer is to transform the product itself into a loan. Secure it against collateral and have the credit bureaus at your disposal. Breaches will become far less likely and electronic payments less elusive when there are actual consequences involved. It’s a dreaded word and one MCA representatives have spent years avoiding, but according to the state of California, it’s probably a loan already anyway.

As MCA providers struggle to keep up with payment alternatives, banks are wondering when we’ll all wake up from the “it’s not a loan” euphoria. If the goal is to provide capital and get more back, reprogramming a terminal isn’t going to cut it. How many free hours can America Online offer to bring people back to their dialup internet service? Technology changed and the age of AOL ended. So too may the age of Merchant Cash Advance…. at least in its current form.