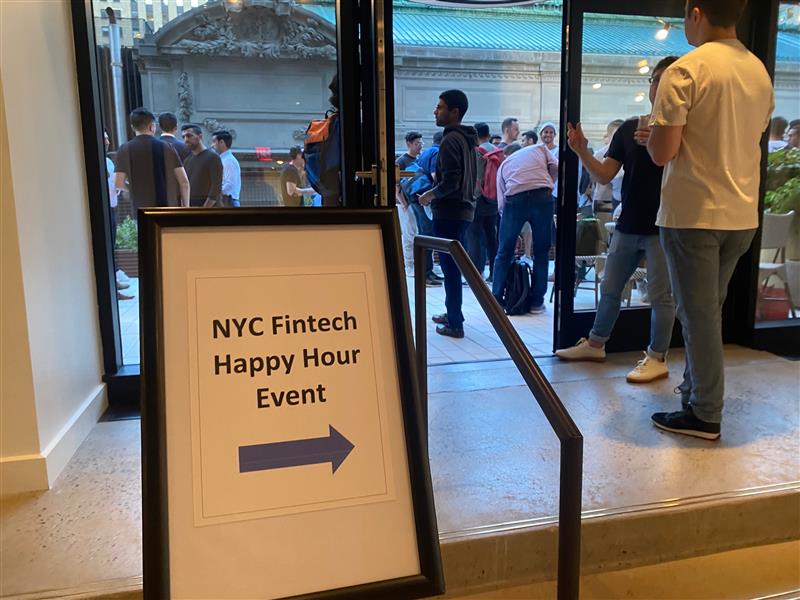 In one week, there were two fintech meetups. One was a virtual network-o-thon, a chat roulette-like elevator pitching practice extravaganza put on by Money 2020 founder Anil Aggarwal. The other event was a Twitter meetup happy hour with an open bar on the roof of a building on Madison Ave, hosted by “This week in fintech” newsletter writer and Google Pay developer Nik Milanovic.

A greater contrast of the old and the new could not have been achieved by surrounding dinosaur bones with NYC pigeons. Aggarwal’s Fintech Meetup Event was entirely online and attended primarily by professionals looking to sell their financial platforms, services, and network. It was seemingly the last virtual event of the pandemic era. Calling in from living rooms across the world, attendees paid hundreds of dollars for the opportunity to be guided by an automatic 15 minute conversation time limit.

Meanwhile, Milanovic’s meetup on the roof was attended by younger community members looking to hang out with friends and meet industry peers for a free drink after work. The tech people outnumbered the ‘fin’ representatives three to one, deBanked assessed.

The bar was packed and stocked with wine, Montauk IPAs, and Fat Tire beer. Standing room only and hard to move from one side of the roof to the other, the young networking crowd pushed elbows in.

Milanovic was the topic of conversation in many of the cliques forming that night. Most of the guests were readers of his newsletter and followed his work in the fintech space. After it was over, it was revealed that New York was just the first of many in-person locales Milanovic planned to host similar events, like Chicago July 15th, and LA Aug 5th.

“We launched Fintech Meetup as a meetings-centric virtual event because the pandemic made it impossible to hold a comprehensive and inclusive in-person event this Spring,” Aggarwal said in a statement. “Going forward, however, our primary focus is on end-to-end tech-enabled in-person events that also include all of the traditional aspects of events–from sessions and speakers to sponsors and exhibitors.”

That next in-person event will take place in Las Vegas in March 2022.