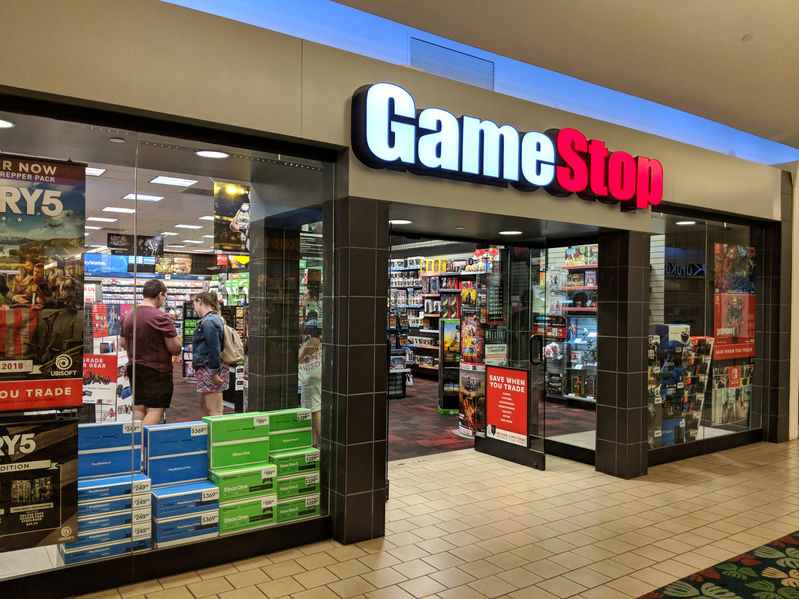 Nearly a month after the GameStop (GME) stock price shot halfway to the moon, the House Committee on Financial Services gathered representatives from the trading conflict in a hearing to examine what happened.

The focus was on a struggle between big institutional money and retail, everyday investors. Armed with nothing but zero-commission investment apps, government stimulus, and with nothing to do but sit at home waiting for a pandemic to end, retail traders exploded onto the securities markets. One of the results was a dramatic rise and fall of GME at the end of January.

Vlad Tenev, the Robinhood app’s co-founder, faced the highest number of questions after the firm blocked trading of GME on January 28th. Across the videocall-octagon was Keith Gill, a r/WallStreetBets retail investor long on GME since the summer, known by some as u/DeepFuckingValue.

With his signature headband hanging in the background, sitting in a gaming chair, Gill donned an uncharacteristic suit and tie while representing himself as a stand-in for the millions of retail investors who were along for the ride.

His message: he is no expert, is not responsible for the volatility of a multi-billion dollar securities market, and after everything, he still likes the stock.

“I support retail investors right to invest in what they want when they want to,” Gill said. “I do not have clients, and I do not provide personalized investment advice for fees or commissions. I am an individual investor.”

Gill went on in his testimony to state that his posts and video appearances about GME to other investors were not trading advice and no different than talking in a bar about a stock he liked.

Before the run-up of GME, Gill had a small audience of around 500 viewers. After GME started gaining ground, Gills’s online popularity exploded alongside the Reddit stock betting forum r/WallStreetBets. 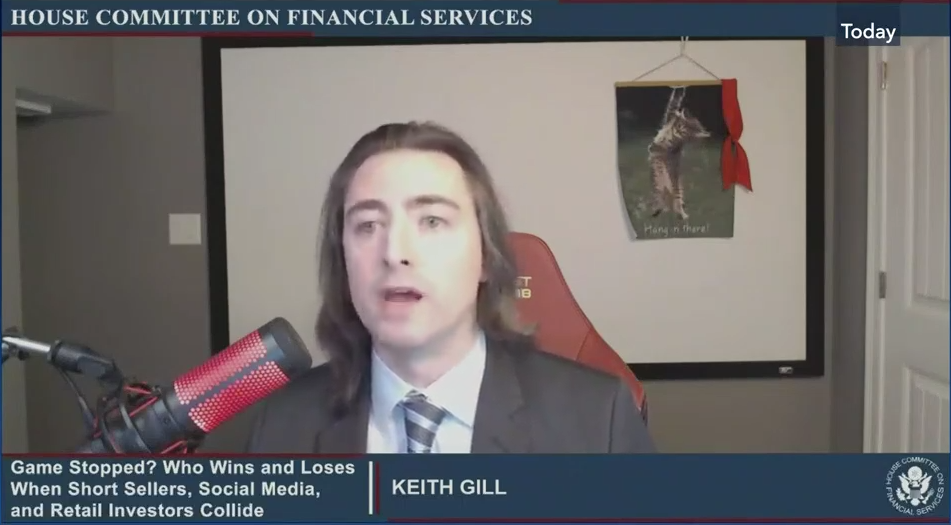 Gill gained hundreds of thousands of followers, while WSB saw a rise of 8 million members in just one week. In the end, his positions in the stock earned him $22 million, as he shared with his extended family over the holidays, “we’re millionaires.” Many were not as lucky, and some have looked toward social influencers like Gill as speculators and market manipulators.

The Congressional Committee were light on their interrogation of Gill, acknowledging the importance of protecting retail investor rights. In challenging Tenev of Robinhood, Committee Chairwoman Maxine Waters set the tone, stating: “The market volatility around GameStop has highlighted how many people believe the cards are stacked against them.”

Waters asked numerous yes or no questions to Robinhood’s Tenev, who could only respond with drawn-out statements. Overall, the fintech founder was apologetic but still insisted Robinhood did nothing wrong and does not answer to hedge funds.

“Look, I’m sorry for what happened, and I apologize. I’m not going to say Robinhood hasn’t made mistakes in the past,” Tenev said. “We’re going to learn from this and make sure it doesn’t make the same mistake in the future.” 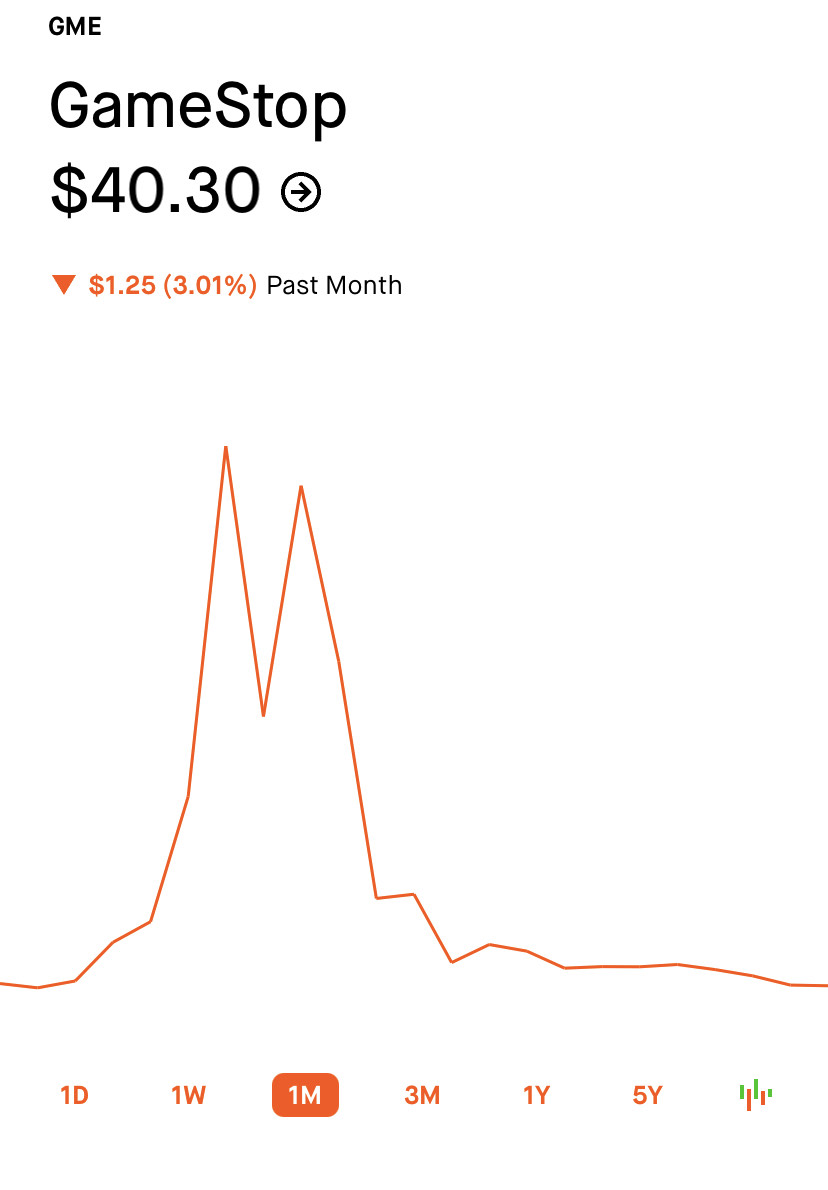 At the height of the trading frenzy Thursday, January 28th, Robinhood suddenly restricted the purchase of GME and other “meme” stocks and only allowed selling. Demand plummeted because, despite problems in the past, Robinhood is still a favorite in the r/WallStreetBets community. Prices roller coasted downward. From a high of $468/share, the GME price dropped down to trading in the $40 range in the month that followed.

Tenev was explaining his financial responsibilities to clearinghouses as a brokerage firm.

On the morning of January 28th, Robinhood suddenly received an email from a subsidiary of the DTCC, holder of all U.S. traded securities. It asked for an increase of $3 billion to ensure Robinhood could back the explosion of GME trading, an astronomical price. Robinhood complied by shutting down buying, offering sell-only, bringing the insurance price down to more than $700 million. The firm also reached out to existing investors to raise billions in capital, yet Tenev still insists there was never a liquidity problem.

Representing traditional, “smart money” investors was Ken Griffin of Chicago hedge-fund Citadel LLC and market-maker Citadel Securities, known for its short-selling positions. Alongside was Gabe Plotkin, the founder of Melvin Capital, a hedge fund with many short positions in GME, lost $6 billion in just 20 trading days. During the crazy trading week, Melvin was offered $2.7 billion in new investment from Citidel funds after losing 30% of its value.

Citadel is also a prime market maker for Robinhood, completing many of the app’s trades. Some, including those house members lobbing questions, saw a firm that self describes its mission as “to democratize investing,” cut out the poor and give to the rich. It looked like a collaboration between a major investor making up for losses due to app trading while retail investors were left out.

Chair member Blaine Luetkemeyer, a Republican from Missouri, expressed his concern that GME had been an over shorted stock and that “naked shorting” drove the price down.

“You have stated in your testimony that you had no intention of manipulating the stock,” he said. “If you’re short selling your stock 140%, for me from the outside, that looks like what you’re doing.”

Both Citidel and Melvin Capital representatives said there was no collusion to drive the price down, no over shorting, and no buy-out when the short positions failed.

The end of Gills’ testimony, read in front of a “hang in there” cat poster summed up the hearing well.

“It’s alarming how little we know about the inner-workings of the market, and I am thankful that this Committee is examining what happened,” He wrote. “I’m as bullish as I’ve ever been on a potential turnaround. In short, I like the stock.”