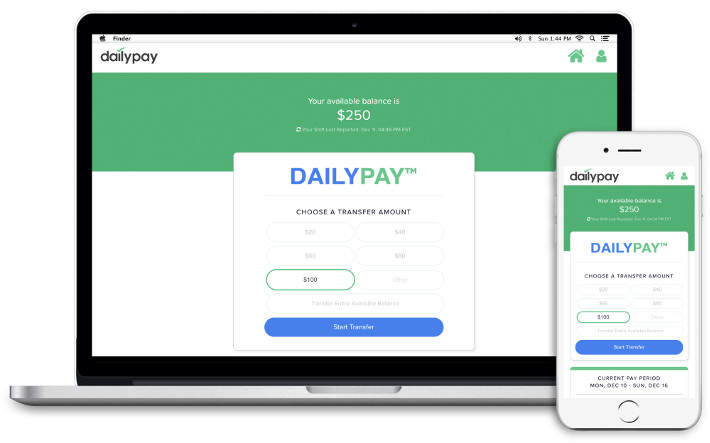 Americans are worried about paying their bills. DailyPay, a payment flexibility platform, gives businesses the ability to let workers access their paycheck early. For customers using the platform— no more waiting for payday.

“We’ve created this industry that’s called the on-demand pay industry,” Kopko said, “which is essentially a technology that allows workers to get paid whenever they want without having to disrupt the employer’s payroll schedule.”

The system works as an employer-sponsored benefit; with business permission, the service collects time clock data, payroll data, and accounting data. DailyPay uses that data to estimate how much money a worker can collect after every shift, or in some cases, every hour worked Kopko said. If a worker is getting paid $2,000 a week, but after withholding gets a $1,300 direct deposit, DailyPay will be able to calculate it.

“So our technology essentially integrates all those systems, allows you to monitor your balance on a constant basis,” Kopko said. “To say: ‘Well, my work yesterday actually accumulated net of all my tax withholdings $123’ and then it’s essentially an ATM for your paycheck.”

Kopko said the product is geared toward the two out of three people in America that are only paid once or twice a month. If the first of the month comes around, but it’s a week to payday, that’s when an employee needs DailyPay- to pay rent when they have no other option.

With pandemic unemployment and state closures, the team at DailyPay has seen an increased interest in the platform. At the beginning of the shutdowns in March, DailyPay saw a 400% increase in users in just three days.

Without using a service like DailyPay, the way these consumers make payments is through overdraft on bank accounts or payday lending, Kopko said. Surveys of DailyPay customers show one in four overdraft two to four times a month. After using the service, that number went down from 25% to 5%. Kopko shared that after using DailyPay, the number of customers relying on overdraft went down 40%.

“We’ve estimated that [customer] financial savings are approximately $1,200 a year,” Kopko said. “It’s not just about a tool for convenience; it’s about putting hundreds of dollars back into people’s pockets, the most vulnerable among them.”

Overdrafts have long been used as evidence toward claims that traditional banking harbors abusive, predatory practices toward the lowest-income working families. In 2017, the CFPB found that nearly 80% of overdrafts originated from the lowest 8% of account holders. That year Americans paid $34 billion in overdraft fees, according to MarketWatch.

Kopko said the platform is not just good for consumers, but businesses as well. He said DailyPay stats show an average of 40% increase in employee retention.