Can Amazon and Goldman Sachs Win With SMB Lending? 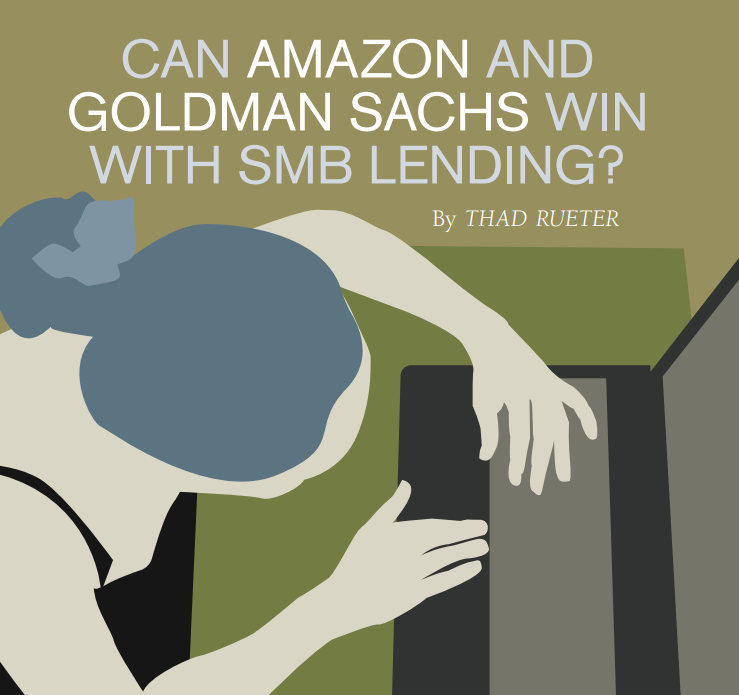 B2B e-commerce dwarfs the value of retail online transactions — by some estimates, those B2B transactions top some $1 trillion per year in the U.S., which compares to about a half billion dollars of revenue for the B2C side. And B2B e-commerce keeps on growing as more companies — especially small- and medium-sized operations — look to online marketplaces and other channels for daily suppliers, and otherwise shift toward fully digital and mobile operations instead of relying on paper invoicing and other analog supply chain processes.

That’s one of the important factors to keep in mind when considering the prospects of Amazon potentially working with Goldman Sachs to offer SMB lending options by adding the investment bank to the Amazon platform. The possibility of such a business offering — pairing up one of the world’s leading retail, delivery and one-button payment operations with the venerable investment bank — was floated early in 2020 and is already casting a shadow across the B2B and lending community. The backing and brand strength of Goldman Sachs could help unleash a new SMB lending force — one that is also fueled by Amazon’s treasure chest of consumer data and Goldman Sachs’ underwriting expertise. But let’s not get ahead of ourselves just yet.

Significant pitfalls come along with the anticipated opportunities. Not only that, but nothing has yet gotten off the ground, at least not officially. Here’s the idea, culled from previous reports and conversations with experts who know the lending space, along with keen observers of retail and Amazon: The e-commerce operator, eager to build a stronger ecosystem around its already robust B2B marketplace and related operations, would team on SMB lending with Goldman Sachs, itself eager to break into new product lines and add some new fat to its margins.

Amazon and Goldman Sachs aren’t saying too much about that idea and did not comment for this story. The rough outlines of the plan appeared in the financial press in February. But it’s no secret that the two companies are indeed looking for new financial products and new consumer segments.

Amazon has built its B2B business into a unit whose growth has recently outpaced its retail side and even its powerhouse Amazon Web Services. As well, Amazon was on track in 2019 to invest some $15 billion in new tools for small- and medium-sized business, according to company documents and officials.

Granted, much of that explosive growth comes about because B2B is relatively new for Amazon, but such growth demonstrates how well Amazon is gaining — and even keeping — new B2B customers. Many of them are attracted to the digital and mobile efficiency of the Amazon platform, to say nothing of the speed of Amazon deliveries as the Seattlebased company continues to pour massive investment into trucks, warehouses, fulfillment robotics and other logistical areas. Just consider this data point: SMB thirdparty sellers tend to make up more than 55 percent of sales in Amazon stores, according to company financial documents.

Loans offered by Amazon and Goldman Sachs would help those Amazon customers fund purchases of supplies without having to seek out another creditor — or leave the Amazon online and mobile ecosystem.

“If the SMB is already using Amazon to sell and distribute their product, it makes sense they would also accept a loan from them,” Julie Stitzel, the vice president, Center for Capital Markets Competitiveness, U.S. Chamber of Commerce, told deBanked. “Amazon is already a trusted partner of their business operations and integrating the financial component is convenient—it saves time because you don’t have to deal with two separate entities.”

The move also would make sense, at least on paper, for Goldman Sachs, Joe Ganzelli, Sr., a Senior Director for Cornerstone Advisors, told deBanked. “They are not in the small business space, and this is a space that, frankly, would be challenging for them to compete in without a partner,” he said. Additionally, this potential SMB lending partnership with Amazon could come as Goldman Sachs executives seek to meet their goals of diversifying their business in 2020 and beyond, according to Ganzelli, previous comments from those executives and other reports. “Small business is such a big driver of our economy,” he said.

Those are among the main opportunities. But just because Goldman Sachs and Amazon are involved doesn’t mean the SMB lending offering would succeed. For instance, both companies have had bouts of recent or high profile failure. Who, for instance, has forgotten the massive stumbles of Goldman Sachs leading up to the 2008 financial crash? And while Amazon has gained ground with fashion and apparel, the company has had a relatively hard slog selling trendy clothes to consumers. Could SMB lending become another pothole for those two companies?

Well, certain obstacles would have to be overcome. For Goldman, the learning curve to gain expertise on SMB lending would be severe, according to Ganzelli — even though all that Amazon customer data that’s already been acquired by the e-commerce giant would certainly help with that education. Still, “anytime you enter a new niche, it’s challenging,” he said. As for Amazon, the main — and perhaps only real downside visible at this point — comes from the commitment that comes with SMB lending. “Amazon will be contractually tied to this arrangement if it’s not a success or does not meet growth objectives,” he said.

All that said, this stands as an appealing time for these two heavyweights of the U.S. economy to see if they can make good money via SMB nonbank lending. “While the majority of small and medium size business lending comes from banks, alternative lending products are an increasingly popular option for SMBs,” said Stitzel. “Allowing you to work with one entity to streamline business operations and mitigate economic volatility in a cost effective way, frees a SMB owner to focus more on building their business and less on administration. Companies like Square and Intuit are already successfully doing this for SMBs using their platforms.”

That’s not the only wind behind the sales of this growing trend of alternative SMB lending, of course. Millennials still might take all kinds of scapegoating heat for various consumer, cultural or economic trends — unfairly or not — but the fact is that those younger people are growing up, and starting to take more responsibility for B2B operations, including supply chain and invoicing tasks. As that happens, millennials are playing a growing force in anchoring more B2B companies to mobile and digital platforms. In general, millennials prefer one-stop shopping with trusted outlets. That would certainly benefit Amazon and Goldman Sachs in any SMB lending offering they launch — as that is now helping such alternative lending offerings as Kabbage and some of the newer PayPal products.

“Millennials are the folks who grew up with the expectation of seamless digital experiences,” Ganzelli said. Those B2B consumers are willing to pay the often “hefty” premiums that come with such experiences, too, he said. “The delivery experience and the speed-to-close just blows banks out of the water.”