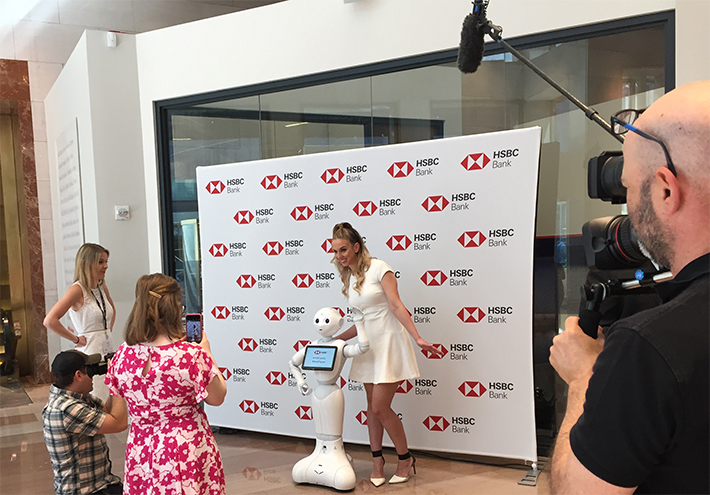 A partnership between HSBC Bank and SoftBank Robotics America came to fruition this morning when a robot named Pepper was introduced to media at HSBC’s North American flagship retail branch on Fifth Avenue in midtown Manhattan.

“Thank you for joining us to make history today,” HSBC Head of Innovation Jeremy Balkin said at the flagship bank.

Pepper is the first robot to operate at a retail bank in North America, according to Julien Seret, VP of Global Product at SoftBank Robotics America. Pepper is four feet tall and can hear, speak and move its head to simulate eye contact. You can interact with Pepper by speaking to it or by tapping the tablet on its chest.

“We’re not replacing people, we’re giving them more time to do what they’re good at,” Seret told deBanked.

Seret said that there are already 15,000 Pepper robots being used in throughout the world, many of them in the hospitality industry. There is a Pepper robot that greets visitors at the Mandarin Hotel in Las Vegas and at least one at the Oakland airport in California. They are helpful to provide any repetitive information and are also used at hospitals. 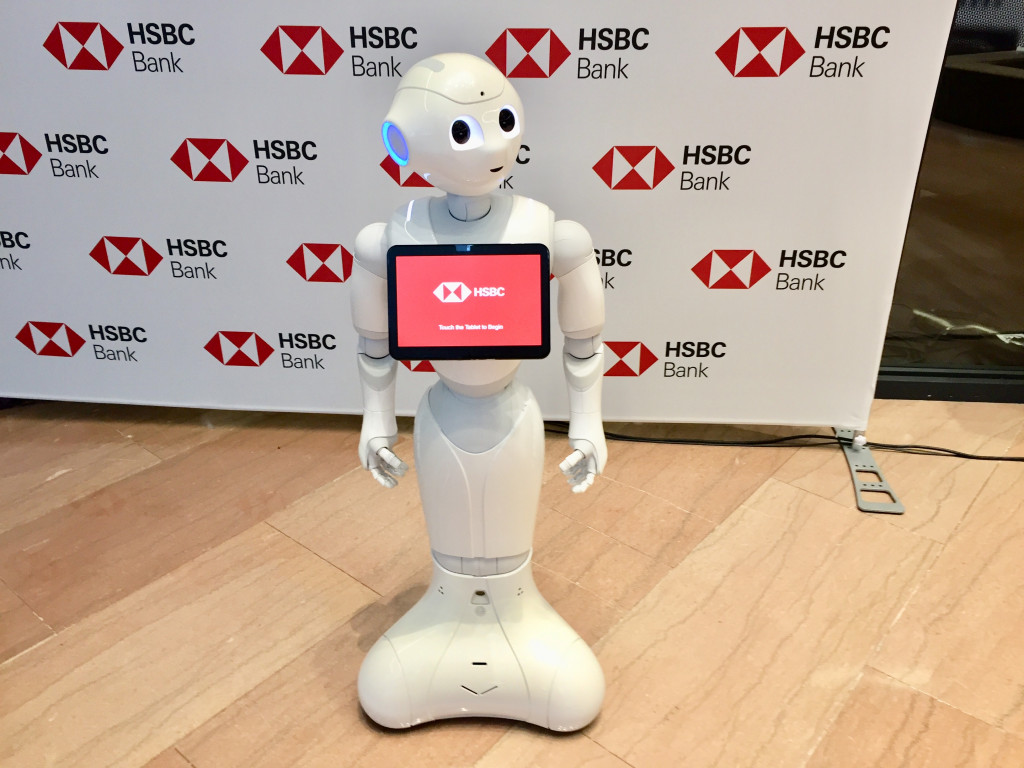 “Pepper is great for engagement with kids,” Seret said of children at hospitals.

Pablo Sanchez, Head of Retail Banking at HSBC, said that HSBC staff brought Pepper outside on the street yesterday for two minutes and 200 people surrounded the robot. Of the onlookers, one came in to learn more about HSBC’s products and then opened multiple accounts. With foot traffic at the Fifth Avenue flagship branch of 18 million people a year, part of Pepper’s appeal is to draw in potential customers.

“But [Pepper] is not just a gimmick,” Sanchez said.

Right now, Pepper mostly serves the role of a knowledgeable greeter, answering questions like “Where can I deposit a check?” Pepper will tell people where to find the ATM machines. But Sanchez said that down the road Pepper could help people open accounts.

While Pepper is capable of facial recognition and collecting and storing other data, Pepper doesn’t that because of privacy laws that SoftBank Robotics and HSBC must abide by and are very respectful of, said Head of Studio at SoftBank Robotics Omar Abdelwahed. But Abdelwahed said that Pepper would be capable of recognizing a regular hotel guest, knowing that the guest is part of a loyalty program and then upgrading the guest’s room.

A Pepper robot is $25,000 to buy, although SoftBank is mostly using a leasing model where users pay about $16,000 for the robot.