Is Lending Club Misleading New Investors About Past Performance?

New retail investors interested in the Lending Club platform are greeted with a friendly statistic, that “99% of portfolios with 100+ Notes have seen positive returns.” That’s a slippery statement, which is probably why they footnoted it.

The footnote says that only applies to A through E notes, the only grades of securities that Lending Club is still selling. F and G grades are excluded, presumably because they are no longer for sale as of last month after they noticed “an increase in prepayment and delinquency rate.”

By excluding the notes that significantly underperformed, Lending Club has apparently been able to raise the portfolio performance statistic being marketed to new investors.

On October 28, 2017, for example, Lending Club was reporting that 97% of portfolios with 100+ notes had positive returns. That was representative of all notes. Immediately after announcing that they were discontinuing F and G notes, they raised that number to 99% and added a line about how F and G notes were excluded from past performance.

:::Poof::: And just like that, the bad loans and their drag on returns no longer exist from the history reported to new investors. 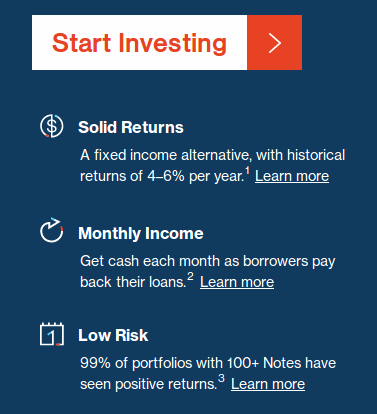 The problem with ignoring the letter grades that bamboozled some investors in the past is that Lending Club determines the letter grade of the security, not an independent ratings agency. That means that an F or Grade-grade borrower in October could just be deemed a D or E-grade in December and nobody would be the wiser. Retail investors have no way of knowing because Lending Club’s grading system is proprietary. Go figure.

Even if Lending Club did not do that, they’re setting a terrible precedent. If portfolios underperform, again, what’s to prevent them from continuing to make similar inflated claims about returns with a new footnote that excludes D and E notes?

It’s important to bear in mind that Lending Club is in the business of selling securities to unsophisticated retail investors. That 99% of portfolios allegedly yield positive returns is no doubt a major selling point to those worried about the risks of online lending. Why else would Lending Club feel the need to make that a big headline in their marketing?

Online lending is very risky. That’s why in October, the number of portfolios with positive returns wasn’t 99%. Lending Club should not be permitted to sweep past investor losses under the rug.