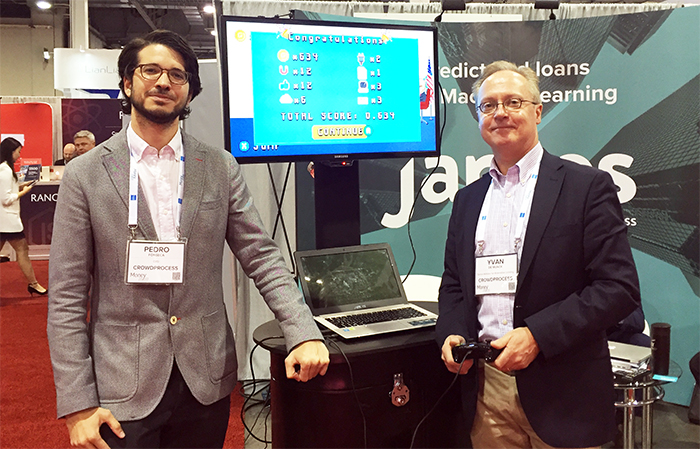 New York, NY – 26 Jun, 2017 – Exactly one year after winning Money20/20 Europe Startup Competition, James (a FinTech in Credit Risk, formerly known as CrowdProcess) returns to Copenhagen after closing an oversubscribed investment round led by Ex-Credit Suisse Board Member Gaël de Boissard. This round also included ex-Deutsche Bank COO, Henry Ritchotte, and BiG Start Ventures, a VC focused on FinTech and InsurTech. As a result of this deal, Mr. de Boissard has now joined James’s Board of Directors, after having previously been at the board of Credit Suisse.

The company that successfully pivoted into the FinTech industry in late 2015 sees its ambition of building the first Credit Risk AI, together with the superb results achieved with banks’ risk departments as the major factors behind this successful investment round. According to Mr. de Boissard, “Having worked in banking and credit for more than two decades, I was always surprised to see how little progress was being made in advancing the science, data analysis, and process automation around credit risk. When I met James I knew that was the future I’d been looking for, and I’m incredibly excited to be part of implementing the first credit risk AI.”

Providing financial institutions with solid, scientifically-backed risk management tools can help prepare them against cyclical crisis and help protect their reputation, making the global financial system safer in the long-run. Additionally, the fact that the company has a track record of helping banks achieve results such as 30% default rate reduction and 10% acceptance rate increase has been the cornerstone of its growing reputation both in the US and in Europe.

After going through a product/market fit process that involved testing the solution with over 25 financial institutions in three different continents, the company is now focused on execution and growth. In order to fulfill this, company co-founder and lead researcher Pedro Fonseca recently handed over the role of CEO to his co-founder João Menano, who built the company’s strong international commercial reach. This marks the beginning of a new stage for the company, where the focus has shifted from finding product/market fit to reaching global scale.

This investment round will allow James’s team to grow accordingly to the market needs felt mainly in the US and in Europe.

James is a data science company focused on the credit industry. Founded with the goal of bringing the best of data science to every risk department, James is on its way to build the first Credit Risk AI. Currently operating in three continents, the solution was tested by over 25 financial institutions, from Tier 1 banks to alternative lenders.

Winner of last year’s Money20/20 Europe Startup Competition, the 20 person startup aims to one day place the best of data science in every risk department.

Last modified: June 27, 2017 This is a press release account. Content posted by me are not editorials or promotions. Share your press release with us at info@debanked.com | (212) 220-9084