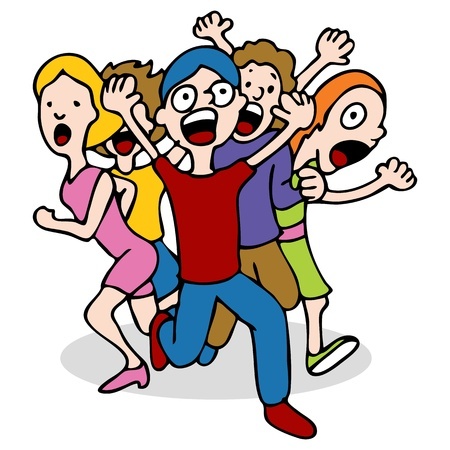 Lending Club investors are used to wonky stuff happening in the run up to a quarter’s end, but perhaps now since the company is public, making sure the numbers align with nice perfect trends that analysts expect is more important than ever. Either that or all hell really broke loose.

On the Lend Academy forum, where you can get a great glimpse of the front lines, chatter about a loan surge started on June 22nd and escalated from there.

“Huge # loans dumped in all of a sudden, and almost all allocated to fractional,” wrote veteran user Fred93. “Hard to fathom. My best guess is that this flow might be a result of having turned on some new source. Hard to guess why they are allocating them all to fractional.”

I personally noticed the increase too when I realized I didn’t have to fight robots and algorithms to get the loans I wanted. There were so many that I could pick them at my leisure.

Around this time, Anil Gupta of PeerCube pointed out that Lending Club’s Q2 loan volume had been about 10% lower than Q1’s, thus potentially putting the company in emergency mode to show growth.

But with all those loans piling up, something else happened. The loans weren’t actually issuing and conspiracy theories began to develop.

“I had nothing issued as well….with over 120 notes pending…lc playing end of quarter games,” wrote one user named kya.

Other users speculated that there was something more ominous than just games. There was a lot of discussion of the possibility that something had happened to the major institutional buyers that was causing almost all of the loans to be suddenly dumped off on retail investors, where there just wasn’t enough supply of capital to handle them.

And for a couple of days there, nothing appeared to be getting through. A handful of users reported that only 1% of purchased notes were actually becoming issued loans. The other 99% were in limbo. Everyone’s money appeared to be locked up.

But then suddenly on June 29th, the loan spigot turned off completely. “This would be a new quarter end behavior,” wrote a veteran user by the name of BruiserB. “Normally they keep placing notes on the platform for investors to buy, but they just hold up actually issuing the notes. This is the first time I have seen them stop even offering notes.”

Not that anyone really needed more notes since practically none of the previous ones they had recently bought had been issued. Everything was backlogged.

So was all the chaos just quarter-end volatility? Many did not think so. A member representing LendingAlpha.com thought the system might actually be breaking down. “What is happening now is highly unusual, as they typically push hard to find a large number of borrowers and at the same time their systems broke.”

Others started talking about a purported breakage too on June 30th, including the possibility that Lending Club’s Automated Investing option stopped functioning in the last week of the month.

LendingAlpha.com claims to have gotten a response from a Lending Club representative that admitted there were actual technical problems at play. “Their engineering team is communicating internally that the problem should be resolved by tomorrow (July 1, 2015), and the supply and demand imbalance should be back to normal by early July,” he posted on the Lend Academy forum.

All of the irregular activity prompted LendingRobot, a third party automated investing service to issue a notice to all of its users. 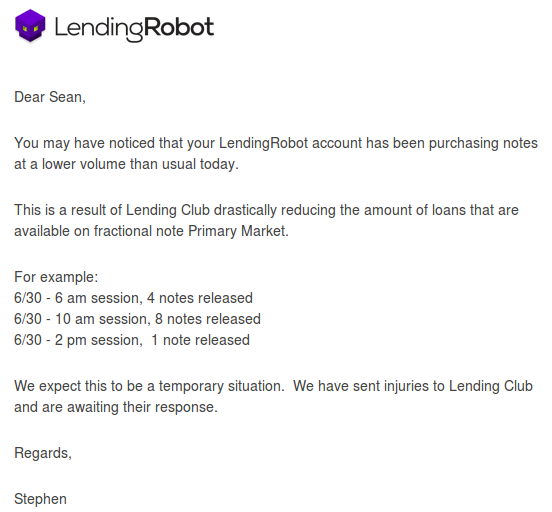 While chatter on Lend Academy’s forum surged about the strange events, it got literally no coverage by blogs or news media. Fortune and Bloomberg claimed that the sudden plummet in Lending Club’s stock price had to do with investors suddenly waking up to the risks of online lending.

Meanwhile, veteran note buyers like user lascott were conversing about an unprecedented breakage that had led to long loan issuance delays and in all likelihood, unhappy borrowers.

It should be noted that several forum users also trade the stock. Might the hysteria and speculation that the institutional investors were all dead and backlogged loans were blowing up the system have caused some selling activity?

At the end of June when everyone’s finally starting to hit the beach, I doubt Wall Street suddenly woke up and thought, “Damn, this regulatory risk is scary as hell. Time to sell Lending Club.”

I don’t know why the stock is down exactly but it’s ironic to see news media offer broad market generalities while a crisis unfolds in a public forum.

What happened at Lending Club in the last week of Q2? Nobody really knows but it seems like everything’s getting back to normal now that we’ve started Q3. The institutional investors aren’t gone and backlogged loans are starting to issue.

Nothing to see here folks. What were you saying about regulatory risks again?