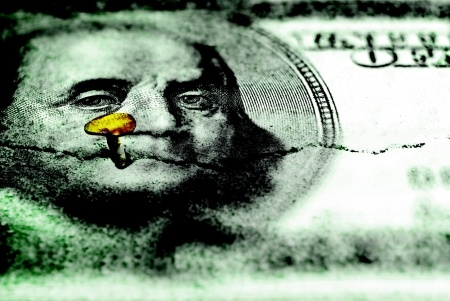 A self proclaimed borrower of Lending Club and Prosper loans posted a tell-all on the Lend Academy forum earlier today and the allegations are alarming. Below is a summary of their experience:

Disturbingly, the borrower says they were able to get a second loan from each lender without their employment/income being re-verified.

“I guess I could have lost my job and you never would have known,” the author writes.

Suspiciously however, they go on to make an off-the-cuff recommendation that peer-to-peer marketplaces be required to invest their own money in the loans they issue.

“Why wouldn’t a company file a proof of claim?,” they questioned. “I have to assume because they have no incentive to do so. If the law was changed so these companies had to put up 10-20% of their own money, you may see them caring more about the investors.”

One has to wonder why an individual that successfully evaded a creditor after drowning in debt and filing bankruptcy would come on to lobby for a law that would encourage that creditor to do a better job collecting.

Regardless of us being able to confirm the borrower’s authenticity though, they did raise some good points.

Is it possible that a credit bureau could show accounts as open that are actually closed? Of course. A recently issued FTC report revealed that one in five consumers had an error on at least one of their three credit reports. But even worse, one in just four consumers identified errors on their credit reports that might affect their credit scores.

If 20% of reports are not perfect and 25% of consumers see material errors in their reports, then investors are working off of pretty shoddy data to make decisions.

Additionally, a common complaint by investors on the forum are loan amounts for debt consolidation that wildly exceed the borrower’s actual revolving debt. Could this be a sign that borrower intent is not validated?

And while I couldn’t confirm whether or not income and employment are re-verified on additional loans from the same lender, the implications of playing fast and loose the second time around are troublesome. Lending Club states that past performance is the predominant basis for another loan:

To qualify for a second loan, you’ll need to meet the current credit criteria for the second loan and have made either 6 or 12 consecutive on-time monthly payments on your existing Lending Club loan*, depending upon the size and term of the existing loan.

But while the defaulting borrower tells us to be afraid, historical data paints a different picture. Peer-to-peer lending guru Peter Renton has long touted repeat borrowers because of the stellar returns they produce.

And Orchard’s analysis of Prosper loans two years ago confirmed the same. The more loans a borrower took with Prosper, the less likely they were to become delinquent on their loan. This was only the case for the first 12 months of the loans, not in their entirety to maturity, which they didn’t examine at the time. 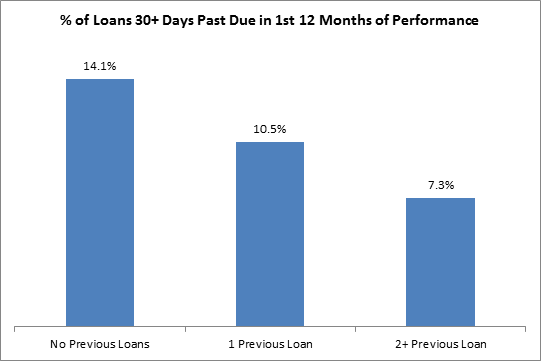 But while the statistics look good, the defaulting borrower is perhaps warning us that a lender’s guard comes down with positive past performance and is therefore vulnerable.

Whatever the case may be and whatever the author’s true intentions are, it is certainly alarming to read that a borrower lied, their credit information was inaccurate, they defaulted on the loan, and the lender made no effort to make a claim in the bankruptcy proceeding.

Is tech-based underwriting and the marketplace model showing cracks? You be the judge…