Twitter co-founder Jack Dorsey built his original company with toothpaste makers in mind. He might even say, “Thanks to Twitter, people in Istanbul can finally get tips on what makes the smiles in Shanghai so white. Tips on scrubbing those molars are transmitted in real time from Rio de Janeiro to Moscow!”

That’s good news for companies like Colgate, but for companies involved in technology, Dorsey reveals that Twitter is basically useless. “No one is following your company’s mundane tweets. No one cares if the Square card reader got a thumbs up from a business owner in Maine.” Of course he hasn’t actually said this in words, but his actions speak volumes.

Dorsey is also the founder and CEO of Square (https://squareup.com/), a credit/debit card reader that can plug right into an iPhone, iPad, or Android. We follow them on Twitter to keep an eye on news that might be worth sharing. But the only news, is no news. What’s up with that?

We compared Square’s tweets to three POS hardware companies, Verifone, Ingenico, and Magtek. We threw in Colgate for good measure. 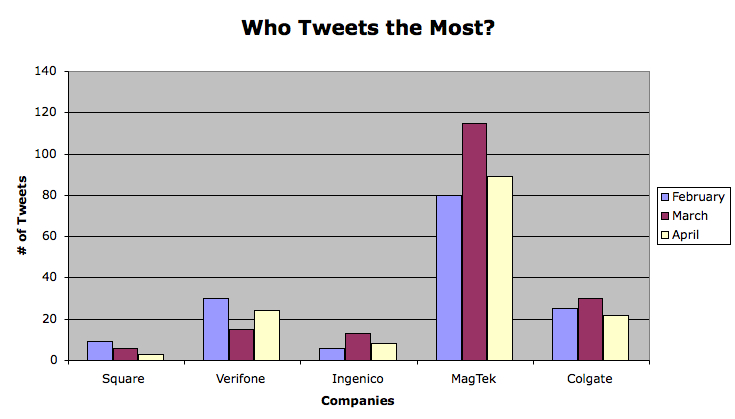 Square, led by Twitter’s Dorsey, ranks last among peers in average monthly tweet volume.  As Square seeks a permanent place for itself in the electronic payments world, it has undertaken a massive public relations campaign. None of which includes tweeting. Thank you Mr. Dorsey for revealing what most of the world already suspected, that commercial tweeting is useless.

Magtek was mentioned in a newspaper in Andorra #werule