The Interchange Debate: A Political Mess and a Waste of Time


The Huffington Post published a lengthy article today, titled “Swiped: Banks, Merchants And Why Washington Doesn’t Work For You.” While it reiterated the talking points for both sides of the Durbin Amendment debate, it made the case for neither. Rather it highlighted the dirty business of Washington politics. Millions of dollars are being spent on an unrelenting battle, which frankly will result in no winner.

Debit interchange reform was enacted in Australia in 2004 after an exhausting four year debate. The outcome? No savings were passed on to consumers and debit card use declined nationally. We broke down the findings in a previous article: Interchange Regulation and Reduction, Proof it Will Fail. 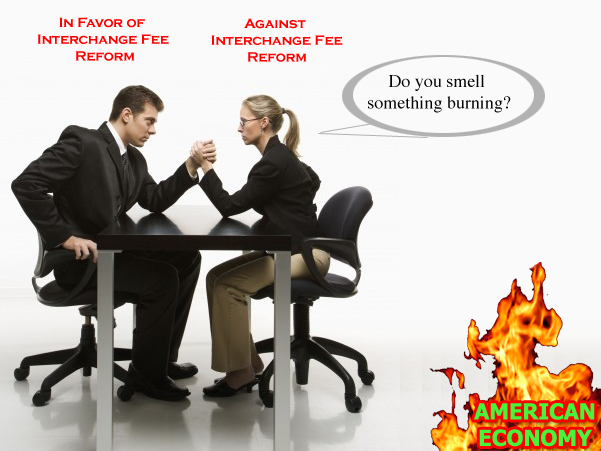 We will not make our case here again, but instead would like to point out the refreshing perspective by the Huffington Post:

“As swipe fees dominate the Congressional agenda, a handful of other intra-corporate contests consume most of what remains on the Congressional calendar: a squabble over a jet engine, industry tussling over health-care spoils and the never-ending fight over the corporate tax code.

The endless meetings and evenings devoted to arbitrating duels between big businesses destroy time and energy that could otherwise be spent on higher priorities. In America today, over 13 million people are out of work and millions more are underemployed. One out of every seven is living on food stamps. One out of every five American children lives in poverty. Yet the most consuming issue in Washington — according to members of Congress, Hill staffers, lobbyists and Treasury officials — is determining how to slice up the $16 billion debit-card swipe fee pie for corporations.”

We don’t remember debit card fees causing the Great Recession. We do remember the corrupt mortgage brokers, the exotic derivative securities, the overly leveraged investment banks, and the deficit spending at all levels of government. Repeal the Durbin Amendment or support the Debit Interchange Fee Study Act so we can undo the damage already caused and move on to more important matters.

Home › Merchant Processing, MPR Authored › The Interchange Debate: A Political Mess and a Waste of Time