Take Your Rewards Card and Get Out of My Store


2010 has been a wild ride for the payment network giants and card issuing banks. On the one hand, The Wall Street Reform and Consumer Protection Act that went into effect July 21, made significant improvements to card acceptance policies for merchants(summary here). Businesses may now legally offer discounts to customers willing to pay in cash. In the past, business owners have argued that card interchange fees reduce profit margins and therefore they should have the right to incentivize cash payments. This argument won the hearts of lawmakers and is now law.

On the other hand, the U.S. Justice department filed antitrust lawsuits against card behemoths Visa, MasterCard, and American Express on October 4th for anticompetive practices. It broaches the same issue, the ability for merchants to incentivize discounts for cash. Visa and MasterCard settled immediately, citing mainly that the lawsuit sought to challenge policies that had already been changed. They did however agree to expand on a merchant’s right to incentivize discounts, including (and most shocking) their right to discourage the use of a rewards card by a consumer. A direct quote from Visa’s press release on the subject “As part of the settlement, Visa will allow U.S. merchants to offer discounts or other incentives to steer customers to a particular form of payment including to a specific network brand or to any card product, such as a “non-reward” Visa credit card.”

The ramifications of this settlement are earth shaking. A retailer still can’t discriminate amongst card issuing banks and everyone would agree that’s fair. For instance a business can’t choose to only accept Bank of America Visa cards and not accept HSBC visa cards. The problem is that customer John Doe has a rewards card that pays him 1% Cash Back on all purchases. When he makes a $100 purchase, the $1 is credited to him by the bank that issued him the card. Most consumers don’t realize that cost is passed on to the business, who is then essentially being charged an additional 1% in their interchange fees to pay for John Doe’s reward.

Business owners made the case that they should have the right to offer a discount for cash or as it now becomes clear, the right to tell their customer not to use a rewards card.

I use my rewards credit card everywhere I go, and I tend to fall in the obnoxious category of consumers that whip it out just to buy a $1 cup of coffee. Until recently, any retailer enforcing a credit card sales minimum was in breach of policy and subject to termination for card acceptance altogether. Many retailers took the risk anyway. That policy was abolished in the Wall Street Act in July. Businesses now have the right to set a minimum. Having worked in the payments industry for several years, it was a necessary and long overdue step.

The average individual transaction cost is 20 cents, which excludes the interchange rate. A $1 cup of coffee would generate a loss of 23 cents in card fees alone, therein making the sale moot for the retailer. Consumer card behavior is difficult to change. I still try to use my card for coffee for example, regardless of the impact.

Larger ticket items are certain to create a consumer uproar. Here’s the problem:

John Doe goes to Best Buy and pays $100 for DVDs on his regular Visa card. Next in line is myself and I try to purchase the same DVDs with my 1% Cash Back rewards card. The cashier tells me I can either:

While it is great to have options, my non-rewards card is reserved only for emergencies and I don’t have that much cash in my wallet. While it’s only a $1 difference, I’d like to pay the same amount as the previous customer. After all that $1 “cash back” isn’t immediately credited to my bank account, it’s stored as account points which will accrue over time and eventually pay me a reward. As far as I can tell the previous customer was using the same rectangular piece of plastic as me. Why should my personal private rewards contract with my bank now interfere with my ability buy products at the same price as other people?

The cashier argues that the retail price of the DVDs are $101 and $1 off is essentially the discount for using a non-rewards card. The consumer in me doesn’t seem to agree and the fictional Best Buy in this scenario would have a discrimination lawsuit on their hands. 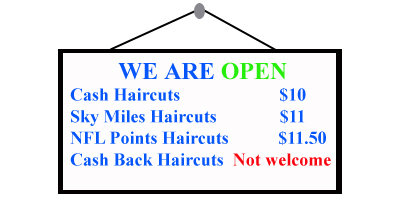 As a card payments veteran, I find this discretion beneficial to the business, but as a consumer I find it intrusive and discriminatory. I would not like cashiers to inspect for reward program clues every time I use my card. If the signatures match, I’d like to pay the same price as every other customer.

My bank recently offered a limited-time-only 3% Cash Back program. I can only imagine what would happen when you actually try to use it. “Hey you, get out my store!”  The new rewards card these days is the card that rewards you with a discount for not using a rewards card. Thank you Justice Department and Congress for making every day ‘opposite day.’

And to the first retailer that tells me they have the right to charge me more for using a Cash Back card, I’ll see you in court.

Home › Merchant Processing, MPR Authored › Take Your Rewards Card and Get Out of My Store