As part of the mission to find the best loan options, Loans Canada, a loan matching service, surveyed 1,477 people who have borrowed from online payday lenders. The goal was to look at the average person’s experience that gets an online or payday loan, and the respondents reported problems with the unregulated nature of payday lending.

The sample was composed of “credit-constrained” individuals, with 76.2% reporting they had been rejected for a loan in the past year, and 61.5% reporting that they had a low credit score. The data shows that borrowers with poor credit will have to rely on alternative lenders, the survey outlined.

Of those surveyed, more than a fourth reported unfair, problematic lending and debt collecting practices. 33% of respondents said they accepted unfair loan terms because the lender used confusing language and 27% said they took a loan product or service they did not need, convinced by aggressive sales tactics.

Borrowers faced issues with pre-authorized debits, an agreement where the borrower gives their bank permission to send money to the lender. 33.6% of respondents complained their lender debited their bank when asked not to do so, while 32.5% of respondents had to place a “stop payment” order on the lender.

When it came to paying on time, only 21.9% of borrowers did not miss any payments. Of those who did, over a fourth experienced aggressive behavior from a lender.

Finally, 32.9% of people who took out an online or payday loan had their debt sold to a collection agency. The paper argues that Canada’s debt collection businesses have to follow different regulations in different provinces. Sometimes, debt collectors can rely on Canadians not knowing their local rights by using unethical intimidation techniques.

Of those that had their debt sent to agencies, 62.1% reported the agency misrepresented themselves when they contacted the borrower, sometimes as law enforcement or as a law office. 52.7% of respondents sent to collections received calls from an agency masked to hide their true identity.

Among lenders themselves, threats to garnish wages, seizing assets, and arrest were in the toolbox for collecting delinquent payments 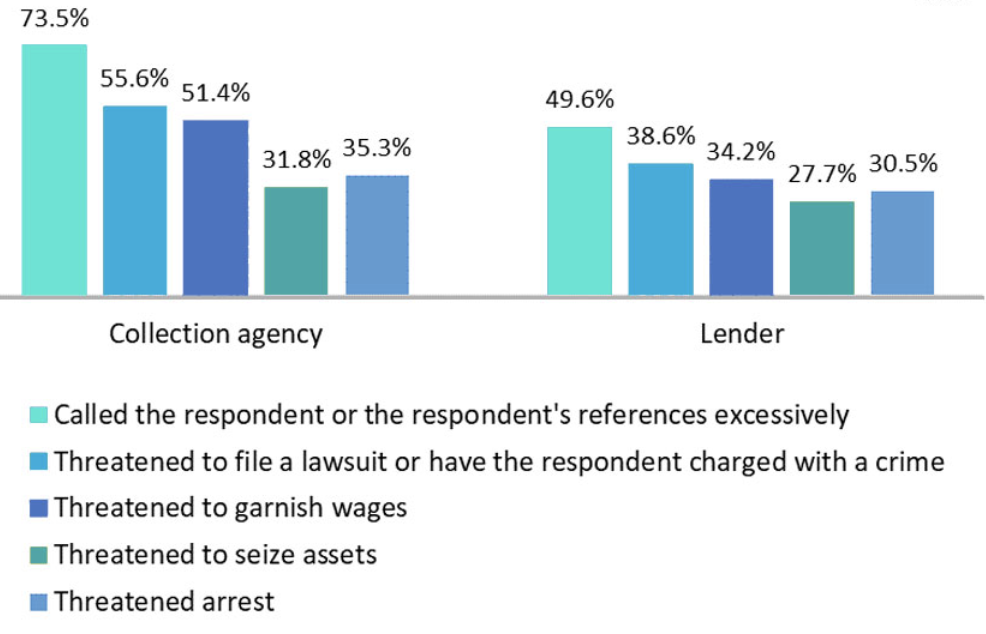 Loans Canada hopes the information shows problems with online payday lending but highlights credit lines are a two-way street. As lenders need to be held to standards that aim to fix unfair practices, borrowers need to uphold their side of the agreement. Overborrowing is a one-way street to missing payments, leaving lenders little choice.