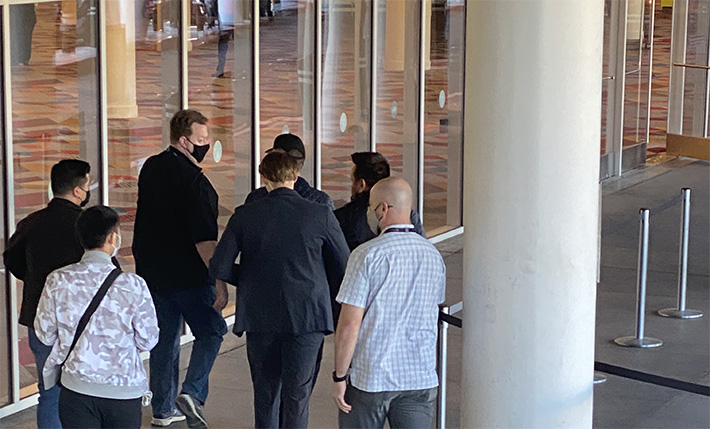 Above: Plainclothes authorities outside the Venetian walk out a man in front wearing a black hat.

The action taking place at Money 20/20 in Las Vegas this week included the appearance of law enforcement authorities Tuesday afternoon. Their target, a man deBanked is not naming despite witnessing his encounter with the agents who came for him and confirming his identity through multiple sources, was confronted while smoking a cigarette outside the Venetian during the event.

The plainclothes agents escorted their target back through the casino without any formal restraints. An officer who was sporting a Money 20/20 badge while blocking off the area told deBanked that the detainment was legitimate, but denied to confirm whether or not he was a federal agent.

The target reportedly engaged in a massive cryptocurrency pre-sale earlier this year and has been described by other media outlets as an international fugitive living in the United States. It is not known if the encounter was related to those issues. It was no secret that the company itself would be exhibiting there as they announced that they would be on their website earlier this month.

A security officer at the Venetian who was patrolling the area after the encounter had taken place claimed to have no idea the incident had occurred.

At the target’s exhibit hall booth, employees of the company there said they had no knowledge of the incident. Upon being shown pictures of the encounter by deBanked, an executive, who acted as a translator when deBanked spoke off the record with a company representative the day before, told the rest of the employees at the booth to leave because he “didn’t want anybody to get trouble.”

The company’s team ditched the booth within a half hour while the event was at its peak.

When asked about the Feds making an arrest at the event, Public Relations with Money 20/20 expressed no comment.

Fintech’s largest trade show of the year will continue until Wednesday.