The Strange Connection Between Bloomberg, the AG’s Office, and the State Senator Proposing Legislation

When deBanked Chief Editor Sean Murray replied to it, to urge those legislators to hear both sides of the story, Friedman immediately deleted his tweet.

While the Bloomberg team behind the story has insisted they are just there to report the facts, it came across as unusual that an editor would thank a key legislator for proposing legislation in response to his story. When Friedman deleted the tweet once deBanked discovered it, the entire exchange aroused suspicions.

And this is where it led.

The CEO of Bloomberg LP (who employs Friedman) and Senator Hoylman have crossed paths before at an auspicious gathering, the ceremonial ribbon cutting for one of the merchant cash advance industry’s biggest competitors, OnDeck. 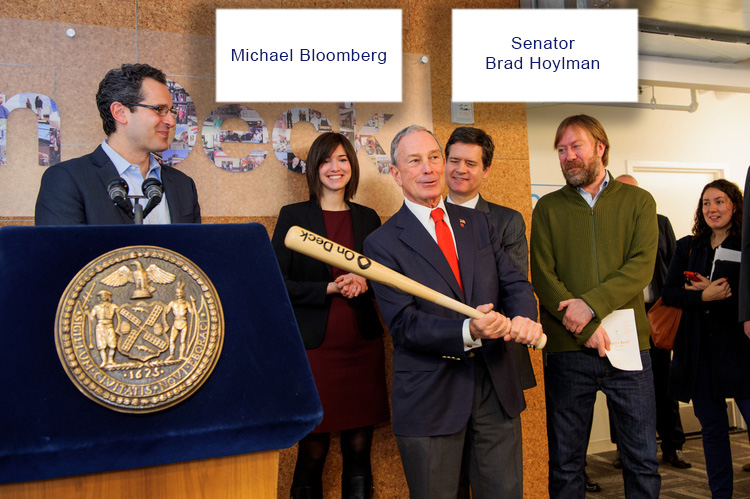 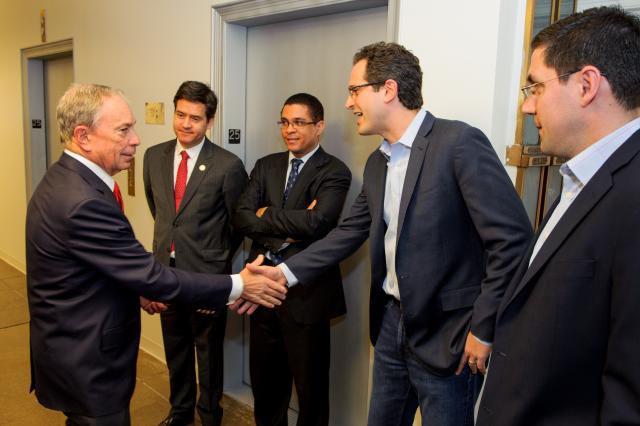 While the photo op doesn’t suggest anything untoward, Mayor Bloomberg also televised a lengthy speech where he expressed the difficulty that small businesses have obtaining bank loans and praised OnDeck for providing a valuable service. At the time, OnDeck offered loans with rates up to 99% APR, which by some metrics of comparison can produce a more costly outcome than modern day merchant cash advances.

Hoylman spoke at the ceremony too.

“I just want to welcome Noah to the neighborhood. It’s a great asset on the west side that we have burgeoning businesses like OnDeck,” Senator Hoylman said in the televised welcome. “This is just another example of [Mayor Bloomberg’s] legacy in sparking entrepreneurship across the city and I’m so glad that it’s happening here in this neighborhood.”

Hoylman followed that up with a public press announcement that heralded OnDeck as being good for New York.

Now, he’s going in a new direction. On Thursday, a Bloomberg News story broadcasted Hoylman’s legislative proposal to crack down on “predatory lenders,” companies that just happen to be OnDeck’s competitors.

Putting that aside, Friedman’s merchant cash advance series in Businessweek rather explicitly focused on the perceived abuse of the New York State court system and Hoylman’s newly appointed position as chairman of the New York Senate Judiciary Committee makes him the prime member to introduce impactful legislation. And that’s where any such coincidental connection would presumably end.

Hoylman and Mayor Bloomberg share another bond, both were sworn in to office by the highest ranking judge in New York State, Chief Judge Jonathan Lippman. Lippman’s role, which he held for seven years until the end of 2015, was to oversee the work of the State’s Unified Court system and to suggest legislation and regulation pertaining to its administration.

And Lippman is directly linked to Bloomberg editor Robert Friedman. Lippman officiated the wedding of Friedman’s son in 2013.

That Lippman is no longer the Chief Judge overseeing the court system matters little. Today, he is the co-chair of the transition committee for New York Attorney General-elect Letitia James. Via Bloomberg News, Friedman’s team was coincidentally the first to report that merchant cash advance companies are now all-of-the-sudden under investigation by the Attorney General’s office. 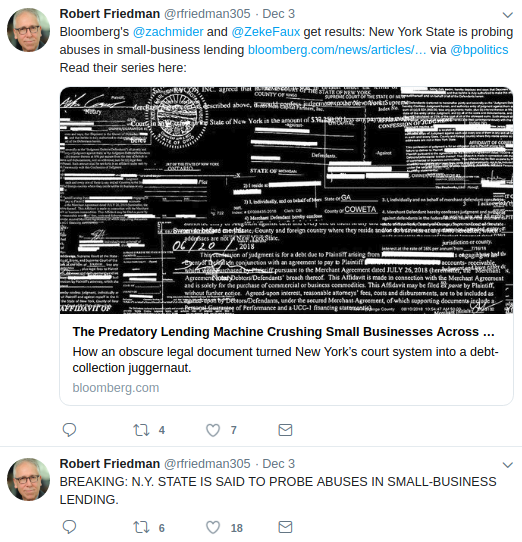 Robert Friedman is the editor of the Bloomberg Businessweek story that portrayed merchant cash advance companies as predatory lenders abusing the court system.

The officiant of Friedman’s son’s wedding used to be the head of that court system, but is now working with the AG’s office. The AG’s office opened an investigation in direct response to Friedman’s story.

The state senator that Friedman thanked for proposing legislation in direct response to his story is the same senator that can be seen on video co-hosting a welcoming party with Friedman’s boss at the office of his target’s competitor.

Friedman’s merchant cash advance series also lacked a key component, actual victims of the supposed predatory lending. In one tale, Bloomberg reported that one business owner had been so victimized by predatory lending that he was selling off his furniture just to feed himself. deBanked later determined that the victim was actually a multimillionaire TV station owner whose account of any such engagement with merchant cash advance companies was incredibly unlikely.

On Thursday, deBanked hoped that a group of New York State legislators would look past the gratitude of a Bloomberg editor to consider that there was more to the story.

As it turned out, there is more indeed.