Coming soon to the business lending industry near you, loan underwriters will not be allowed to know the sex, race, or ethnicity of the small business owners applying.

The law known as Reg B is part of Section 1071 of the 2010 Dodd Frank Act and it expanded upon the 1974 Equal Credit Opportunity Act and set forth rules on how financial institutions collect business loan application data. Financial Institutions was defined broadly enough that it is likely to include merchant cash advance companies and ISOs.

“the term ‘financial institution’ means any partnership, company, corporation, association (incorporated or unincorporated), trust, estate, cooperative organization, or other entity that engages in any financial activity.”

One year ago, the National Community Reinvestment Coalition petitioned the CFPB to include merchant cash advance companies in its purview and went as far as to name all sixteen members of NAMAA (Now the SBFA.)

Thankfully, the CFPB has not yet begun to enforce the law, which as it stands is poorly written and full of contradictions.

The law seems to imply that no one in a decision making capacity on a loan could ever meet the applicant, lest they discover they are a female or a minority and then proceed to unconsciously discriminate against them. Underwriters may not be allowed to know the applicants’ names because of the same issue. Investigating the website of a small business, their twitter account or Yelp page poses legal liability concerns for the financial institution as well since any one of those could provide gender, racial, or ethnic clues. 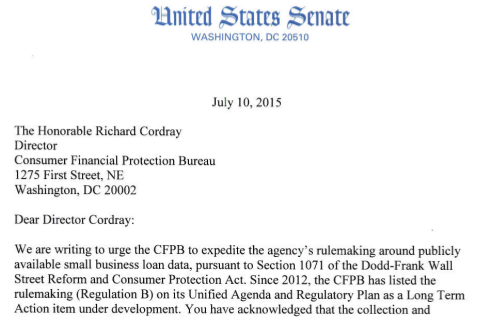 The law’s authors certainly could not have understood that the scope of underwriting had expanded to include public data on the Internet. It would actually seem that they didn’t know how business loans were assessed or would be assessed at all.

Tellingly, alternative lenders like OnDeck were small startups back when Section 1071 was drafted and so it’s likely they imagined all small business lending to be handled exclusively by banks like Citibank or Wells Fargo, where an underwriter in some back office would examine nothing more than a FICO score and a collateral appraisal.

But Section 1071 is being pushed for implementation regardless. On Friday, July 10th, Nineteen U.S. Senators signed a letter urging the CFPB to expedite the agency’s rulemaking on it.

“Together, we want to emphasize the critical need for greater transparency around small business lending data,” it says. “Regulation B will facilitate the enforcement of fair lending laws and help identify the credit needs of women-owned, minority-owned, and all small businesses. We urge the agency to move forward this year with its rulemaking without further delay.”

The letter was led by New Jersey Senator Cory Booker, a political figure that has made himself very visible on small business lending issues.

However shortsighted Section 1071 may be, there are those that believe that law is entirely misguided.

In a 2012 article by the Washington Post, writer Mark Calabria accuses Section 1071 as a way to push affirmative action into small business lending, saying, “The claimed purpose is to ‘facilitate enforcement of fair lending laws and enable communities, governmental entities and creditors to identify business and community development needs and opportunities of women-owned, minority-owned, and small business.’ Translation: Push affirmative action in small-business lending.”

Calabria believes measurement of fairness is a near impossible task since “race and sex of ownership is a demonstrable factor in industries with different failure rates.” He offers these examples:

For example, 16 percent of female-owned firms operate in health care and social assistance, a sector with the comparatively low failure rate of 18 percent. Meanwhile, only 10 percent of Hispanic-owned businesses operate in those industries, while Hispanics own a disproportionately high number of construction firms. In 2009, construction businesses in operation for less than 10 years failed at a rate of 30 percent.

Varying industries have both different success rates and different capital needs, and their demand for loans and their creditworthiness also differ. Since race and sex of ownership is a demonstrable factor in industries with different failure rates, loan pricing and denial will differ across race and sex even in the total absence of discrimination. “Equalizing” denial and pricing in the way Dodd-Frank seeks to do necessarily means extending credit to riskier firms.

Calabria is on to something, but failure rates are just the beginning since consumers tend to be drawn to small businesses that have a story rooted in race, gender, or ethnicity.

Walmart for example, recently launched a campaign to single out products produced by women-owned businesses.

“By sourcing more products from women-owned businesses, and making it easier for customers to identify those products at the shelf and online, we are helping to empower women and their families,” the announcement said.

But while the campaign is intended to level the playing field for women or empower their businesses, there is a more subtle message, that consumers should make buying decisions based upon the gender of the business owner.

It contradicts initiatives at the federal lawmaking level to create a gender-blind small business playing field.

Consumers are regularly marketed authentic ethnic cuisines made by someone authentically ethnic and told to choose women-owned products if they are a woman. This type of marketing exists because it works and it’s embedded in our society.

Under Section 1071, business lenders are being asked to potentially ignore information then that may be highly relevant to the future livelihood of some small businesses.

There’s a reason why the first page of a Cipriani brochure begins with the opening of a bar in Venice in 1931. Is there an ethnic identity attached to their brand? 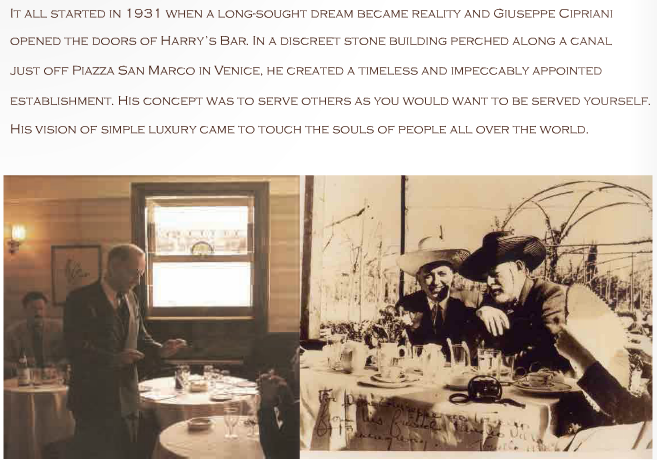 Discrimination may be an inherent risk and something to monitor. It’s impossible however to eliminate unconscious discrimination (the law’s goal) through gender, race, and ethnicity-blind underwriting laws when small businesses and enterprises as large as Walmart regularly turn those factors into marketing campaigns to spur sales.

It would appear that Americans want to have their woman-made cake and eat it too, so long as the financial institution providing the capital has no idea who made the cake or how the cake is marketed.

Section 1071 is hypocritical on its face, ignoring not only modern day business lending practices, but also the pulse of American consumerism.

Let’s hope that when the CFPB is ready to address this law that is already on the books, they recognize that the approach was all wrong and start over.